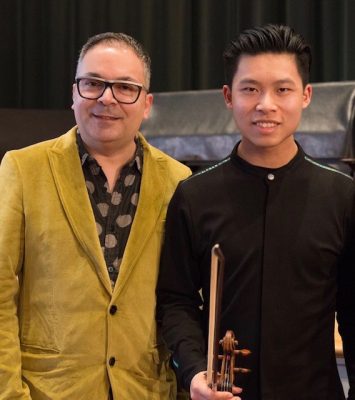 20/20: An Interview with Kerson Leong
By Dr. Gaétan Lang

You might leave the Cohn a little changed after you hear Kerson Leong play Bartók’s Violin Concerto No. 2 with Symphony Nova Scotia on March 12. Kerson is one of those rare musicians who gives the audience a sense of continuous marvel because of his exquisite playing skills and his profound musicality. He is known for his ability to allow an entire room to discover and thoroughly enjoy music pieces that some might have chosen to avoid for fear of not being able to understand or deliver. So effective and beautiful is his playing that the rambunctious passages become exhilarating and the ethereal moments reveal fragility and intimacy that leave you wanting more.

Originally from Ottawa, the 23 year-old violin prodigy has spent the last four years as Artist in Residence at the Queen Elisabeth Music Chapel in Brussels. Co-founded in 1939 by Queen Elisabeth of Belgium and the great Belgian violinist Eugène Ysaÿe, it provides high-level training to blossoming talents. While at the Chapel, Kerson worked mostly under French violinist/conductor Augustin Dumay, but made other connections with the likes of Gary Hoffman, Miguel da Silva, and Louis Lortie, among others. Musical escapades under the tutelage of the Chapel have led him to numerous European halls, but also to the famous Alhambra in Grenada, Spain. This eventually inspired him to take up Ricci’s arrangement of the wonderful guitar piece Recuerdos de la Alhambra, and now, it is one of Kerson’s favourite encores to perform on concert nights.

Kerson often plays under the baton of Yannick Nézet-Séguin as a guest of the Orchestre Métropolitain de Montréal. Moreover, a recent highlight was being asked to accompany Her Excellency, the Right Honourable Julie Payette to Estonia in 2019, and perform Arvo Pärt’s famous song Spiegel im Spiegel at the Arvo Pärt Centre with Her Excellency and members of the composer’s family in attendance.

With his own guidance, Kerson’s concertwear is co-designed by his mother and is inspired by minimalist sport uniforms. This allows for a refined and elegant look, yet still has the comfort and freedom that helps him deliver with total abandon. To help further in reaching the maximum experience possible, his violin is a well-matched 1741 Guarneri del Gesù, on generous loan from Canimex Inc in Québec.

Some of us in Halifax will remember Kerson from a breathtaking recital of the complete Ysaÿe Sonata Cycle at the Lilian Piercey Concert Hall last year with the Cecilia Concert Series. It was a magical moment of music making that left an impression on this city. And there is more to come! It has been announced that he will be showcased at this year’s Scotia Festival of Music that will run from May 24 to June 7.

Tickets for Bravura Violin and Dvořák’s Dances are still available. Click here to get yours.