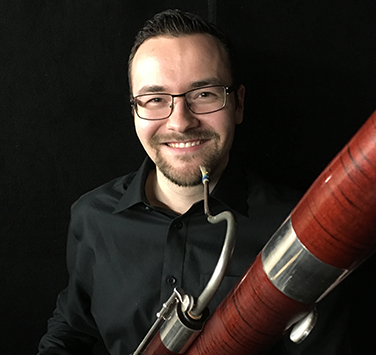 A native of Ottawa, Ontario, Gabe Azzie joined Symphony Nova Scotia as Principal Bassoon in January 2019. That same spring, he completed his Master’s at the University of Cincinnati’s College-Conservatory of Music under the tutelage of William Winstead.

In addition to his university training, Gabe has performed with Boris Brott’s National Academy Orchestra of Canada, and has had the opportunity to tour Canada and Portugal with the National Youth Orchestra of Canada, where he worked under the batons of Emmanuel Villaume, Michael Francis, and Perry So. Other teachers include Kathleen McLean, Mathieu Harel, Stéphane Levesque, Richard Hoenich, and Jo Ann Simpson.

Outside of music, Gabe is an avid hockey and football fan, and also enjoys swimming, travelling, and hiking.

How long have you worked with Symphony Nova Scotia?
Since January 22nd, 2019!

If you couldn’t be a bassoonist, what would you like to do?
I would probably be either a teacher or involved in sports broadcasting.

What do you like to do in your spare time?
Watching/playing sports, movies, the great outdoors, and travelling.

What’s a fact that nobody would know about you?
I’m colourblind!