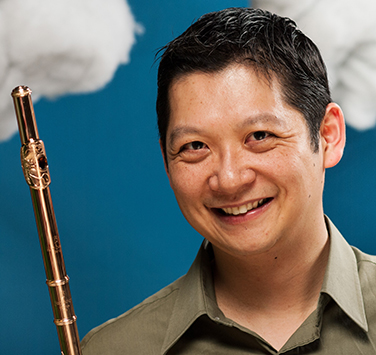 Jack Chen joins Symphony Nova Scotia in the role of Principal Flute for the fall of 2022. Jack has shared the stage with such diverse artists as Bobby McFerrin, Amy Grant, and Sir James Galway. He has appeared in numerous PBS specials and toured with several EMI artists. With a tremendous love for chamber music, Jack performs regularly with Conundrum Duo and Fifth Wind, a Halifax-based woodwind quintet.

In addition to performing, Jack is an instructor at Acadia University, the Artistic Director of Inner Space Concerts, and General Manager of the Nova Scotia Youth Orchestra.

Performing on stage is such a joy! A joy I get to share with everyone on stage as well as the audience.

Do you teach music? Where, and why?

I do! I am lucky to have had a fantastic flute studio at Acadia University for the past 12 years. It is a privilege for me to be a part of these young musicians’ journeys through music, no matter what and where the music brings them.

What are your outside musical interests?

I am fortunate enough to be a part of a fantastic wind quintet called Fifth Wind as well as overseeing a classical house concert series here in Halifax called Inner Space Concerts.