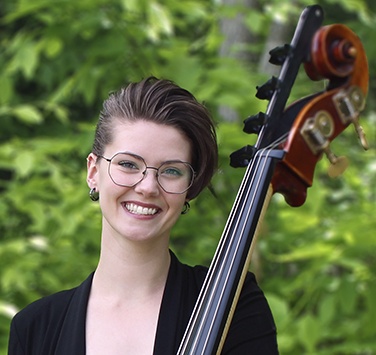 Born to a family of classical musicians, Jemma Jones grew up in Calgary, Alberta surrounded by music and began studying double bass at eight years old. However, her musical endeavours did not actually begin with double bass. She began violin lessons at a young age and performed in a class recital after three short months of playing violin. Playing in this recital, however, was unbeknownst to young Jemma until a few minutes before she performed. After witnessing an older classmate perform Twinkle Twinkle Little Star, she attempted, far too confidently, to squeak out the same tune. It was at that moment that her family knew she would be a performer, just not a violinist.

A few years later, Jemma began to show an interest in double bass. At age 11 she began playing in youth orchestras in Calgary, sparking a love for symphonic music. She studied for nine years in Calgary with Sheila Garrett of the Calgary Philharmonic Orchestra before moving to Montreal, Quebec to attend McGill University. Jemma received both Bachelor’s and Master’s degrees in Double Bass Performance from McGill, studying with Brian Robinson and Ali Yazdanfar of the Orchestre Symphonique de Montreal. Throughout her time in Montreal, Jemma performed with multiple ensembles around the city, most recently with the Orchestre Symphonique de Montreal.

Jemma has also had the pleasure of returning home to Calgary on a few occasions to play with the Calgary Philharmonic Orchestra, in which both her parents play. During the summers, Jemma has participated in the National Youth Orchestra of Canada, Domaine Forget Music Academy, and Orford Music Academy, where she learned from masterful bassists and received scholarships for her playing. Jemma joins Symphony Nova Scotia as Assistant Principal Bass in fall 2022 and could not be more excited to begin playing with the Symphony and to get to know the city of Halifax.

Why did you begin playing your instrument?

I grew up with two musician parents, a flutist and a trumpeter. So, it was an easy decision for me to not play either of those instruments! Growing up I sang in choir, played piano and trombone, and briefly attempted violin, but nothing compared to bass. Bass has always felt most like my voice; it’s the instrument I most connect with on both a musical and soulful level. I truly miss it like I would a friend when I’m not playing. A big part of why I began bass, though, was because of our family friends that played bass in the Calgary Phil. I always admired and looked up to them, I think little eight-year-old Jemma wanted to be like them and figured playing bass was a good place to start.

What do you love about symphonic music?

I feel that music can connect with people, with emotions, in a more profound way than anything else in our world. It’s hard to explain the feeling I get when playing with a large group of musicians, but I like to describe it as “open-hearted.” It’s a feeling of gratitude for all that life has to offer, and a deep sense of connection to not only the people on stage or in the audience, but humanity in general. I think that feeling, for me, comes partly from being a small part of the big picture. Knowing that my addition to the ensemble is important but that there is so much more going on, so much for me to fit into and help bring life to. I suppose I feel a similar way about life in general, that we are just small parts of everything going on in the universe. Symphonic music often reminds me of that in a beautiful way, which is why I love playing it so much. More musically speaking, I love that as a bassist I get to set the foundation for beautiful melodies or bring in that extra gravitas in a particularly epic or heartfelt moment of a piece. I love all the little parts coming together to create a beautiful piece of music and experience, and I feel truly privileged to get to help bring that to life.

What do you like to do in your spare time?
I love spending time outdoors. Hiking, swimming, skiing; anything that gets me outside, active, and in nature. Being in nature is one of the few things that gives me the same feeling as playing music; that wonderful, open-hearted feeling filled with gratitude for life that I think we as humans are always searching for. I’ve already spent so much time looking up hikes and beaches to discover in and around Halifax. I am so excited to get to discover everything that your beautiful city has to offer!