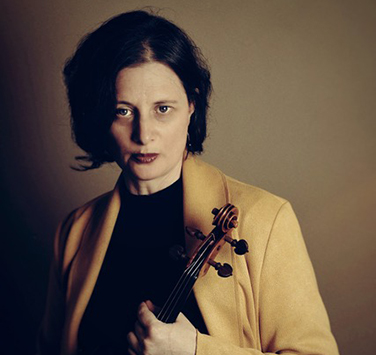 Kirsty Money is a dynamic performer and teacher of modern/baroque violin and the nyckelharpa in the Halifax area. Originally from BC, she studied violin with Sydney Humphreys at the Victoria Conservatory of Music, and has further performance degrees from McGill and Western Universities, as well as her Licentiate from the Royal Schools of Music in the UK. Kirsty has been a member of the first violin section of Symphony Nova Scotia since the 1999/2000 season.

While studying modern violin in Montréal, she was introduced to the baroque violin through playing in L’Orchestre Baroque de Montréal, one of the city’s prominent Early Music ensembles at the time. This ongoing interest and passion for Early Music has led to collaborations with musicians such as David Greenberg (Tempest Baroque Ensemble), Suzie Leblanc (Early Music Vancouver), Jeanne Lamon (Tafelmusik), Alex Weimann (Pacific Baroque Orchestra), Kati Debretzeni (English Baroque Soloists), and David McGuinness (Concerto Caledonia, Scotland). Kirsty has appeared as a guest soloist in the Symphony Nova Scotia Baroque series, as well as with the Boxwood and Sackville Early Music Festivals. Currently, she is a guest teacher/coach at the Halifax Institute of Traditional and Early Music.

Living with the Folk Traditions in Nova Scotia has also inspired Kirsty to take up the Swedish Nyckelharpa, an instrument dating from Medieval Northern Europe. Since 2015 she has been studying the instrument and its repertoire intensely. Through grants from the Canada Council and Arts Nova Scotia, she has been to Nyckelharpa workshops and festivals in Sweden, the UK, and Germany. In 2021 Kirsty was awarded the inaugural Award for Professional Development from Women for Music, an organization dedicated to the promotion of excellence in music performance in the province of Nova Scotia.