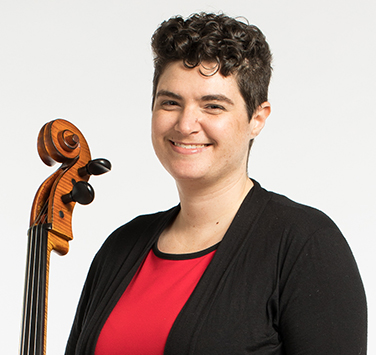 Rachel Desoer is a Canadian cellist. She studied at the Juilliard School, Oberlin College, McGill University, and the Banff Centre. She graduated from Oberlin in 2008 with a Bachelor of Music.

Rachel was the cellist of the Cecilia String Quartet from 2010 to 2018. In this ensemble, Rachel toured extensively around the world, recorded four albums on the Analekta label, and taught chamber music at the University of Toronto.

Touring has allowed Rachel to perform at such inspiring venues as Wigmore Hall, The Concertgebouw (Amsterdam), Konzert Haus Berlin, and many more. The Cecilia Quartet also made educational programming a priority, and performed hundreds of presentations for schools. In 2014, the quartet created a concert series called Xenia Concerts specifically designed for children on the autism spectrum and their families. Exemplifying their commitment to the equal representation of women in music, Rachel spearheaded the commissioning of four string quartets by Canadian women composers in 2016.

Rachel continues to play recitals and concertos with orchestras regularly. She has worked most notably with the National Arts Centre Orchestra and the Canadian Opera Company. Two of her recordings have been nominated for JUNO Awards. Currently, Rachel is the Principal Cello of Symphony Nova Scotia.

How long have you played your instrument?
I just passed my 30th anniversary of playing the cello! It’s been a constant in my life since the age of five and I’m so grateful for the places it’s taken me.

What’s it like to perform onstage?
Performing is a life experience like no other I’ve encountered. On a bad night, your heart is leaping out of your throat, you feel sick, and the audience is a monster out to get you. On a good night, time stops, you breathe deep, and you feel yourself connecting to everyone around you.

What do you like to do in your spare time?
These days I’m into baking, biking, and films. I’m catching up on some pop culture I missed while I was young and in a practice room, such as the Godfather trilogy and the Star Wars saga. I’m also seriously studying baroque music and audio and film production.