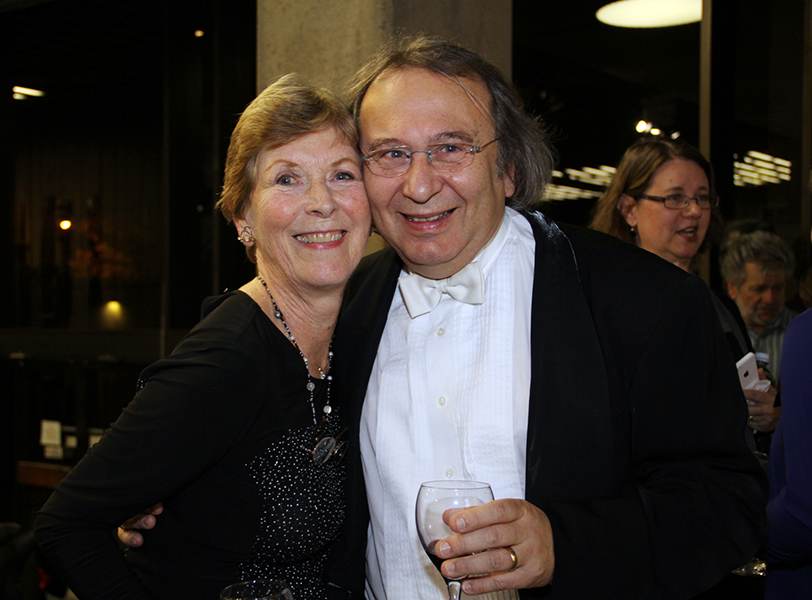 Audrey Tenniswood with cellist Shimon Walt at a post-concert reception

Audrey is a loyal supporter of Symphony Nova Scotia. Her deep commitment to the orchestra spans years as a subscriber, donor, and member of the Legacy Circle. She is also a dedicated volunteer, offering her time and talents in a variety of capacities. (Most recently as our highly-valued “Thursday Volunteer” at the Symphony office.)

Audrey and her husband Roy lived in Ontario before moving to England in the mid ’70s and eventually settling in Halifax in 1980. Roy worked in international banking with CIBC and Audrey had a 20-year career with IBM.

The Tenniswoods were steadfast patrons and their history with us goes back to the days of the Atlantic Symphony. Roy served on the Board and Audrey started volunteering in 1981. In 1985, Audrey was hired by Symphony Nova Scotia to assist with development as Fundraising Coordinator – a part-time position she held for four years before returning to work in the private sector. As a couple, they continued as concert regulars and generous supporters until Roy’s passing in 2006. Audrey has kept her strong ties with Symphony Nova Scotia to this day.

“The versatile and talented Symphony Nova Scotia musicians contribute to the richness of all our lives in many ways which may not be so obvious,” says Audrey. “They teach in our schools, universities, and privately; arrange music for and perform with other musical groups and ensembles; and during the summer months can be found performing and bringing back new ideas from places as far away as China or as close to home as Charlottetown, P.E.I. or the Halifax Public Gardens.”

“I want the Symphony experience to be available for future generations,” says Audrey. “It’s important to give people the chance to fall in love with Symphonic music: pops, classical, or whatever. It may inspire a child to want to learn to play.”

“I have included the Symphony in my will for all the same reasons I donate to them while I’m living.”