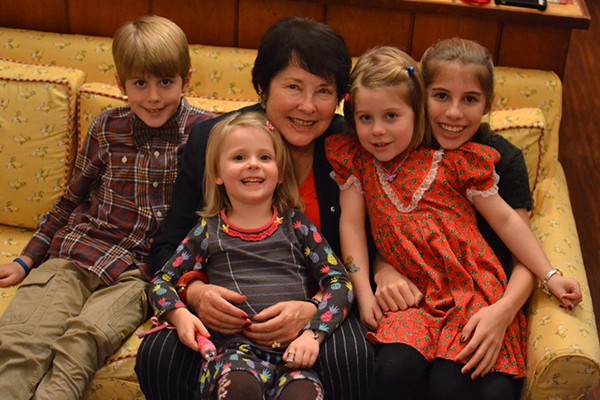 Long-time friend to the Symphony, Dale Godsoe, C.M. with her grandchildren

Dale Godsoe has a long history with Symphony Nova Scotia as a loyal subscriber, generous donor, and esteemed leadership volunteer. She recently shared her thoughts, reminiscing about her attachment to the orchestra and her decision to reinforce her deep commitment with a gift to the Symphony in her will.

“My husband Gerry was a music lover, and it was when we were first married that I became a Symphony subscriber for the first time. Then when the children were young, life was very busy and there was a period of about 15 years that I didn’t go. In the ’90s, I became a subscriber again. I hadn’t been for so long and it was something I wanted to return to. I always bought two tickets so I could bring a friend.

“The Symphony is such a close community – like a large family, really. I have loved getting to know the musicians and many patrons over the years. People who have a love of music are involved all over the community and you see them everywhere – not just at the performances. I have made many new and lasting friendships through the Symphony. People who flock to music are wonderful.

“In the mid-’90s, Bob Geraghty (then Chair of Symphony Nova Scotia) brought me on the Board of Directors and I served two terms. Our concentration was annual giving and the larger gifts associated with Musical Chairs. It was during my last term that the Board started to talk about long- term sustainability and a capital campaign to build the endowment.

“In 2008, Listen to the Future was launched, and I came on board as Chair. I am so grateful to all the remarkable people that worked so hard on, believed in, and supported that campaign. Five years later, we celebrated a successful conclusion with an endowment valued at over $11.5 million and a future full of promise for our Symphony.

“People buy tickets to the Symphony to have a wonderful time. People donate to the Symphony to keep the tradition going. Our donors are so generous; they want the Symphony to last beyond themselves. The endowment campaign really was about the children and grandchildren… and making sure that the orchestra lives on for them.

“Immersing myself in symphonic music has brought great comfort to my life. I am giving this gift because I know Symphony Nova Scotia and I know it will continue on… Listen to the Future was promise enough for me.

“If you are considering making a provision in your will, it is ultimately about what you value. This is personal. Give to something you love.”