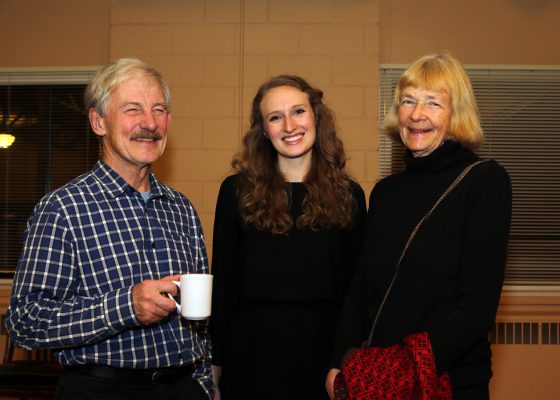 Helga and John are both professors of Biology, recently retired from Laval University. In 2010, they moved to Nova Scotia, settling in Boutiliers Point. It wasn’t long after that they became regulars at the Cohn for concerts and eventually season subscribers and donors. Helga and John recently shared their thoughts on why they love and support the Symphony.

Music was a part of Helga’s life from an early age as both her parents were musicians.

“My father played the violin and my mother played piano,” says Helga. “In Germany, they met playing chamber music and found ways to continue that after they were married. My father was a physicist and immigrated to work in the U.S. – Beavercreek, Ohio, which is where I grew up.”

“There were a few community concerts but that was about it for music in Bridgewater,” says John. “My parents weren’t musicians. They forced me to take piano lessons when I was very young and I was happy to drop it. As a teenager, I became interested in classical music and took up piano again. I had an excellent piano teacher who would enjoy talking about music during the lessons. I went on to Acadia University and there were musical programs there for students to attend. Teresa Stratas and Maureen Forrester were performers I remember.”

John and Helga met in Vancouver when they were both working on their PhDs at UBC. Helga tells us that apparently, John used to listen to opera in the dorm. He had taped radio broadcasts from the Met and played them to his floor mates.

“I love opera, but sometimes think it is an advantage not to understand the words,” says John. “It’s more about the emotion that I get from listening to music.”

Now that Helga and John have settled in Nova Scotia, music plays a big part in their lives here. They are delighted to have access to a wide range of cultural events: Capella Regalis, Kings Chapel Choir, Blue Engine String Quartet, Live Art Dance, Opera Nova Scotia, and Cecilia Society, and they are quick to note the contributions that Symphony musicians make to all of these.

As generous donors, Helga and John have chosen to support the Symphony on an annual basis through the Musical Chairs program. Initially they became interested because they admired the work of Dominic Desautels, Principal Clarinet. They have clearly enjoyed the Musical Chairs receptions, getting to know Dominic and connecting with a number of other musicians throughout the season.

They also understand the impact they are making in supporting the work of the orchestra.

“A good degree of financial stability is essential to keep the large number of well-educated and very talented people that make up the Symphony in our city,” says John. “A quality symphony cannot be put together at the spur of the moment but over time, with a careful search for good replacements when some musicians retire or move on to other opportunities.”

Helga believes it’s important that Symphony supporters are aware of where the money comes from.

“The ticket price only covers about 33% of the costs,” says Helga. “The rest of the money has to come from somewhere, and the private sector needs to step up. If we value music, we have to support it.”

“The Symphony is a monstrous project,” says John. “It takes a lot of effort and planning and money. For me, the personal satisfaction of knowing I can help is really great!”