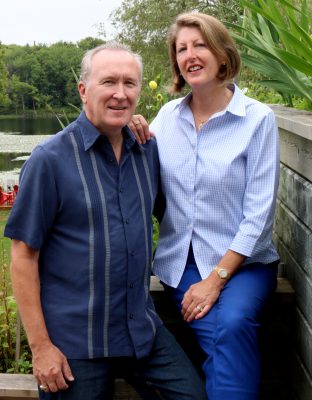 Left: Paul Kent, Trustee of Symphony Nova Scotia Foundation, and his wife, Barbara Kent. Both are long time subscribers, donors, and members of the Legacy Circle.

Paul and Barbara have been married for 38 years. When they reminisce, it becomes evident how much energy, dedication, and unabashed joy they’ve put into building their life together. It also becomes clear that music is a big part of who they are and what they‘ve done along the way.

Growing up (in Dartmouth and Shearwater), they came from musical households. Both trained as dancers from an early age; Barbara had varied interests (tap, stage, step dancing, Scottish Country, ballroom) while Paul honed his skills primarily as a Scottish dancer going on to perform professionally with the Ceilidh dancers on CBC. They met in their early teens and eventually danced together as competitive ballroom dancers, winning several championships.

High school sweethearts, they married in 1979, settling in Dartmouth where they raised two daughters and have become extremely active community leaders.

Paul’s career has spanned decades with various companies like Bell Aliant, Xwave, and Fujitsu Canada. He retired two years ago as CEO of the Greater Halifax Partnership. A highly-respected business leader, role model, and mentor, Paul has contributed his time, energy, and expertise to a multitude of charitable causes. In 2015, he was honoured with the Red Cross Humanitarian Award. The Kents continue to give back to their community as philanthropists and volunteers.

Paul has a history with Symphony Nova Scotia that also spans decades and it is a shining example of his generosity and commitment. Looking back, he described what eventually brought him to the Symphony:

“Music is the most basic motivator,” says Paul. “I can get so emotional about it. I cry over music more than anything else in my life… I spent a year in Toronto in 1978. The open air concerts with the Toronto Symphony, the Mendelssohn Choir at Massey Hall, and the memories of my parents at the piano got me hooked on classical music.

“In the late 80s, I did some volunteer work co-ordinating the Cole Harbour Concert Series with the (then) Atlantic Symphony and the Church of Saint Andrew,” says Paul. “The Symphony was struggling then. Sometimes there were more musicians on stage than there were people in the audience. I grew to understand how much it cost to move the orchestra around. That was when I made my first financial contribution to the Symphony.”

Barbara also remembers a pivotal event: “The Symphony Explosion concert at the Metro Center,” she says. “At the time, I was working with CP Air (later Canadian Airlines) and managing travel arrangements for the Nova Scotia Tattoo performers and East Coast artists like Ashley MacIsaac, Terry Kelly, and the Rankins. The Symphony world collided with our world and our musical passions.”

In 2001, Paul became the Symphony Board Chair, and he went on to become a Trustee with Symphony Nova Scotia Foundation. He feels strongly about the value of the Symphony and is adamant that its impact goes well beyond the concert hall.

“It’s like family to me – precious,” he says. “And it is so important to Nova Scotia. There should always be a vibrant stable Symphony in Halifax… It’s the anchor for the music industry and an essential component of a city approaching half a million people.”

“The richness of our heritage inspires us and informs us,” she says. “Good literature and music lasts and we need to respect and cherish the talent that created it in the first place.”

Paul and Barbara are generous philanthropists; thoughtful about the causes they support and strategic about their about their giving.

“Both our parents taught us that it was important to give back. When we were young, we took out a life insurance policy. Our financial advisor showed us how we could support our charities by naming the charities as owners and beneficiaries. We got it all paid off in a matter of about five years or so and then it was done and we didn’t have to think about it anymore. We were both working at the time and the tax implications were significant.

“As time went on, our advisor coached us into setting up a family charitable trust to handle a lot of our annual giving. Now that we are winding down our expectations for further wealth generation and can see more readily what our financial future looks like, we are more likely to favour donations of stock and cash from our estate. Our advisor continues to work with us as we enjoy our retirement years, even while we continue to reserve a portion of our assets for the support of several excellent charities, including our beloved Symphony.”

“If you are considering a gift in your will, my advice is, do it sooner rather than later,” says Paul. “We’re not in control of our destiny. Anything can happen. Get good advice from your financial advisor and it can be painless.”

Barbara says, “When you plan for something like this, it shows where your heart is… what’s important to you.”