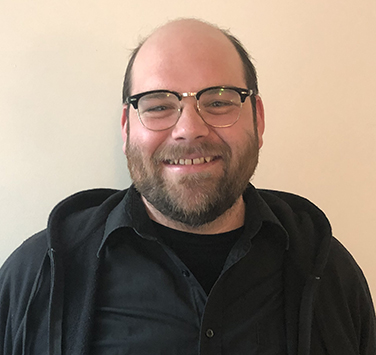 Andrew is an award-winning multi-instrumentalist, songwriter, and producer from Halifax. He is particularly known for his work as a resonator and steel guitarist, as well as a highly in-demand side-man and session player. He has appeared on recordings and in live performance with some of the East Coast’s most acclaimed musicians, including David Myles, Bruce Guthro, Ben Caplan, Colin Grant, Alan Jeffries, Ray Legere, Dave Sampson, Cassie and Maggie MacDonald, Rose Cousins, and Matthew Hornell, to name a few. He is also a founding member of the award-winning contemporary bluegrass band The Modern Grass.

Andrew has worked in many facets of the music industry as a musician, sound engineer, producer, booker, tour manager, and concert promoter. This has allowed him to develop a varied skill set, which he is looking forward to applying to his role with Symphony Nova Scotia.

He has held a deep appreciation for orchestral music from a young age. Growing up, he played trombone in school concert and jazz bands, and has many fond memories of listening to recording sessions of Symphony Nova Scotia recorded by his father.

Andrew is excited to take on this new challenge and join the dynamic team at Symphony Nova Scotia!

Do you have any other jobs?
I also work as a musician and father.

What do you love about symphonic music?
I love the precision of the musicians and the coming together of so many individuals to create one beautiful sound. I also love the harmonic and tonal possibilities in symphonic music.

Do you play an instrument?
Yes, I play several. Mostly, I am known for playing the dobro, also known as a square neck resonator guitar. This is a type of lap-style slide guitar. If you are unfamiliar with this instrument, check it out because it is pretty cool. (At least I think so…)

What do you like to do in your spare time?
I have a one-year-old daughter and a pretty full work schedule, so I can’t really remember what spare time is, but I like travelling, spending time with my friends and family, and enjoying the outdoors — hiking, swimming, and camping.