On the Program:
Disruptor Conductor

Pre-documentary chat with Daniel, director Sharon Lewis, and representatives from the TSO and Symphony Nova Scotia:

PRESENTED IN PARTNERSHIP WITH THE TORONTO SYMPHONY ORCHESTRA

Our Watch Party Discussion Guide is below!

In 2019, CBC followed Symphony Nova Scotia’s Artist in Residence and Community Ambassador Daniel Bartholomew-Poyser as he and Symphony Nova Scotia created Thorgy and the Thorchestra – a brand-new show that went on to tour across North America to audience and critical acclaim. Get the inside perspective on Daniel’s life, vision, and unprecedented career in this unique peek behind the scenes at Symphony Nova Scotia.

As far as Daniel Bartholomew-Poyser knows, there aren’t many black LGBTQ conductors like him in Canada. The child of a working-class Caribbean mother, he was raised in Calgary and, for many years, struggled with his sexuality. “I have often felt ‘other’ in my life,” he says.

Growing up, Bartholomew-Poyser was drawn to classical music and often turned to it for solace. As an adult, he finally found his voice as a conductor. He believes that the beauty of music can heal and unite all of us beyond differences in race, sexuality, socioeconomic status and gender identity.

Bartholomew-Poyser wants to use his musical power for good. In Disruptor Conductor we see him on a mission to break down institutional walls and bring live orchestral music to young people, the LGBTQ community, people on the autism spectrum and prison populations — anyone who might not have had access to it or who may have felt unwelcome in traditional spaces.

Along with RuPaul’s Drag Race star Thorgy Thor, Bartholomew-Poyser creates the first orchestral drag queen show in Canada. It’s a way to express two parts of himself at once, bringing Old World orchestra and his recently discovered LGBTQ community together in a harmonic union.
– CBC

We invite you to watch Disruptor Conductor and then use the questions in this Watch Party Guide to spark discussions with your friends and family. 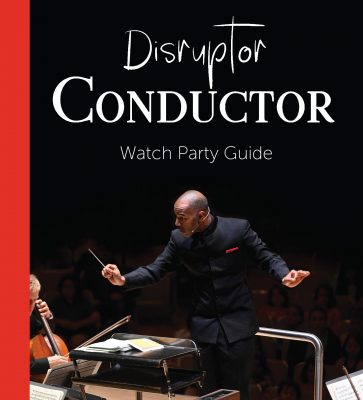