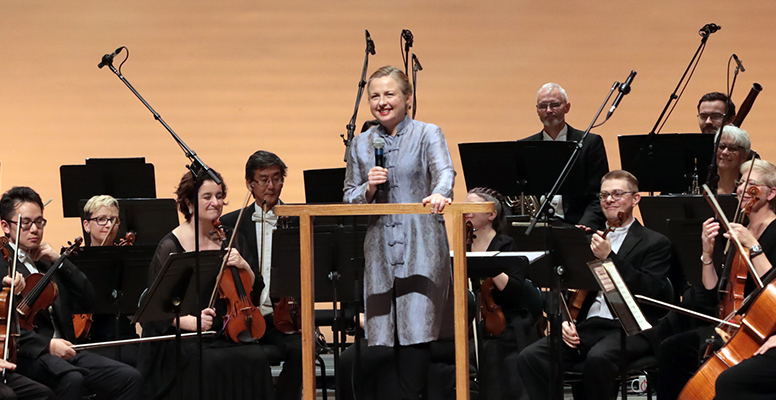 On the program
Mozart: Symphony No. 34

In November 2019, conductor Holly Mathieson joined Symphony Nova Scotia for an unforgettable, rave-reviewed concert that led to her appointment as the orchestra’s Music Director. Hear our performance together of Mozart’s vivid, energetic Symphony No. 34.

In 1779, Mozart was 23 years old, and working as the organist and concertmaster at the court of the Prince-Archbishop of Salzburg. During his years there, he composed church music, several violin concertos, and three symphonies – including this bright, festive Symphony No. 34. He expanded the work several years later to create the version we know today.

I really like the three-movement symphonies of Mozart, Haydn, and their contemporaries. They’re an easily digestible length, therefore ideal for the first half of a programme, and they often have a sweet intimacy to them. This one is gorgeous — I didn’t know it before this concert, and I’m so glad we played it. It makes no aspirations to be grand, yet that doesn’t mean it has any less rhetorical value. The outer movements are joyful, optimistic, and sunny, and they sit astride a lilting middle movement of tremendous tenderness and intimacy.

The players of Symphony Nova Scotia really play Mozart beautifully – full of lift, breath, and with lovely light, free bows. We also decided to play it without vibrato. The effect is like taking an old oil painting and cleaning off the layers of varnish and dust to reveal the crispness and subtlety of the original picture. All sorts of nuanced details are revealed to our ears, and you can make a very innocent, naïve sort of sound, even on modern instruments.

I try to conduct Mozart so that it feels and sounds like a kitten tossing a little ball of paper around – free, playful, and spontaneous. His music can be remarkably robust in that way: you could toss the ball in a different direction every time you play the piece and it will still work, even if you sometimes jeopardise some of the precision. But as a performance practice, you can only achieve that with colleagues in the orchestra who are prepared to throw caution to the wind a little, and really listen and respond to each other in the moment. In that regard, Symphony Nova Scotia is the ideal Mozart orchestra! This was one of those concert experiences that was truly fun.