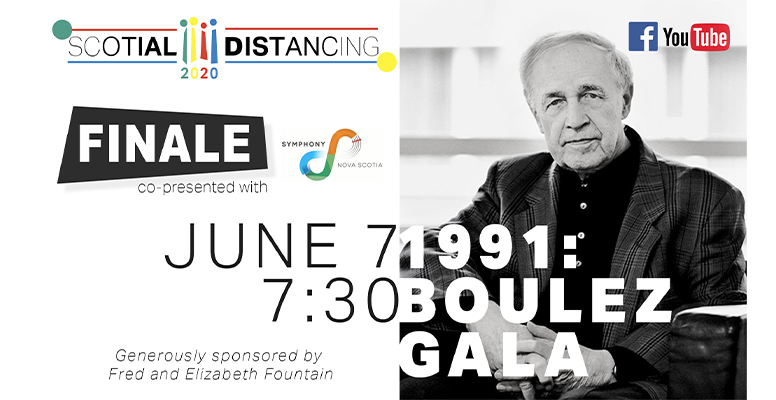 On the program
Bartók: The Miraculous Mandarin
Debussy: La Mer
Stravinsky: The Rite of Spring

PRESENTED BY THE SCOTIA FESTIVAL OF MUSIC – SCOTIAL DISTANCING

Every spring, Halifax’s annual Scotia Festival of Music ends with an exciting orchestral gala, featuring members of Symphony Nova Scotia. It’s always a special occasion, but 1991 will always be a banner year in the Festival’s history – the great French composer and conductor Pierre Boulez led the Festival for two weeks, concluding with this massive concert in the Rebecca Cohn Auditorium, which led The Globe and Mail to describe Scotia Festival 1991 as “the greatest music event in Canada’s history.” Historic footage – never before seen!

The 2020 Scotia Festival of Music, “Scotial Distancing”, runs online from May 25 to June 7, 2020, with daily streamed concerts. For full concert details, click here.

Attracting Boulez, 66—the man whom French flutist Jean-Pierre Rampai has described as ‘the greatest music mind of the 20th century’—was the festival’s greatest coup.
– Macleans