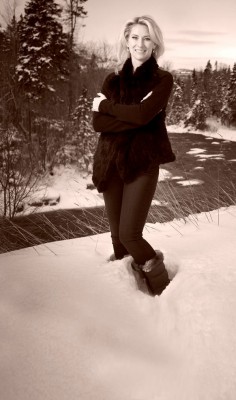 Halifax, NS – Eleanor McCain is about to make history. In an unparalleled and ambitious move to celebrate the country’s 150th birthday with her upcoming True North: The Canadian Songbook, the three-time East Coast Music Association Award nominee is traveling across Canada from St. John’s, NL to Victoria, BC to record with ten orchestras for inclusion on her 33-song recording project.

“The idea for this project began in January 2014 and was to reimagine some of our most iconic Canadian songs in new arrangements for orchestra in celebration of Canada’s 150th birthday,” says McCain.

“But if you plan on recording with a Canadian symphony, how do you choose only one? That’s when the dream happened: wouldn’t it be great to do this with orchestras across the country and make it pan-Canadian.”

To fulfill this dream, the Florenceville, NB native will be trekking across the nation between the months of March and June with Emmy Award-winning album producer Don Breithaupt (The Breithaupt Brothers Songbook), Symphony Nova Scotia’s Associate Conductor Martin MacDonald, and orchestral recording engineer Jeremy Tusz to capture the dynamic and powerful sounds of 40-plus-piece orchestras based on arrangements provided by such stellar arrangers as Shelly Berger, Peter Cardinali, Darren Fung, Lou Pomanti, and Sarah Slean, to name a few.

True North: The Canadian Songbook is a musical celebration of 32 of the nation’s best-known songs, plus one original, as interpreted by Eleanor McCain. It will feature some of the country’s most distinguished performers and recording artists as special guests.

“When I created the song list for this project, I wanted a cross section of styles and songs from across the country. Yet they also had to be songs consistent with my style,” said McCain, a classical crossover artist with a five-album catalogue.

Song titles and guest artists will be announced at a later date.

The orchestral portions of the recording kick off with the 56-piece Edmonton Symphony Orchestra on March 22. The project then relocates to the East Coast later that week to Halifax and Saint John for sessions with Symphony Nova Scotia and Symphony New Brunswick respectively.

The orchestra sessions will be wrapped in Ottawa on June 13-14 with the National Arts Centre Orchestra.

In addition to the recording, a coffee table book featuring picturesque Canadian landscapes captured by nationally prominent photographers will accompany the double CD. The album is also being offered as a stand-alone double CD with an enhanced booklet and as a digital download. The album and book are scheduled for release on Retriever Records in the spring of 2017, in time for Canada’s Sesquicentennial birthday.

The project will also be captured on film for a companion documentary.

“I am so excited to start the orchestra recording sessions and to eventually share these wonderful arrangements of some of Canada’s most iconic songs with everyone,” McCain says.