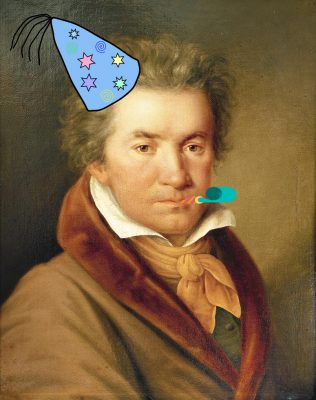 It’s quite unlikely that Beethoven would have heard the classic song “Happy Birthday” on any of his 56 birthdays – it was first officially published in 1893, 66 years after his death. But that isn’t stopping us from singing it out loud all this year!

2020 marks 250 years since Ludwig van Beethoven was born in Bonn, Germany. Though his actual date of birth is unknown (as is often the case with the composers of the era), he was baptised on December 17, 1770.

Did you know? At the time, it was commonplace for children to be baptised the day after they’re born, so it’s widely accepted by scholars that Beethoven was likely born December 16.

Beethoven was the second-born and second-of-seven children to be born into his family, but only he and two younger brothers survived infancy.

Beethoven’s father, Johann, was his first music teacher, and Beethoven was quite adept at music from a very young age.

Did you know? Johann saw the success Leopold Mozart had in promoting young Wolfgang as a child prodigy, and tried the same technique with Beethoven. It didn’t quite turn out.

It wasn’t until he was 12, however, that he wrote his first published composition: Variations for Piano on a March by Ernst Christoph Dressler.

From there, the floodgates opened, and Beethoven wrote 722 pieces over the course of 45 years before his death in 1827. He wrote nine symphonies, five piano concertos, 32 piano sonatas, and one opera, Fidelio. There are monuments to him in both Bonn and Vienna, where he lived in his later years, and the house where he was born has been turned into a museum.

At Symphony Nova Scotia, we’re celebrating Beethoven all throughout 2020 with works like his “Eroica” Symphony in March with Maestro Bernhard Gueller and the Triple Concerto in February with Assistant Concertmaster Mark Lee and the Cheng2 Duo.