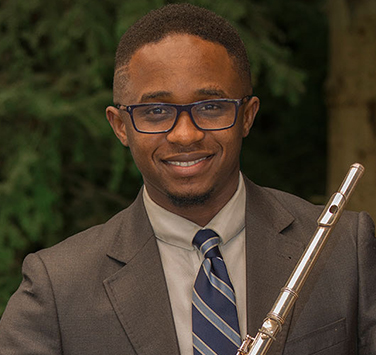 Flutist Ogo-oluwa Sobukola started his musical journey on the recorder at the age of 16, and soon moved on to playing the flute at the age of 17. His exceptional ability was discovered by his music teacher who encouraged him to participate in the MUSIQUEST competition for young musicians, where he emerged as the first runner up.

In 2013, he began studying the flute with Ltd CDR Abayomi Odujobi (Rtd) under the directorship of Mrs. Marion Akpata, and was fully funded by the MTN Foundation in conjunction with the Musical Society of Nigeria (MUSON). As a chamber and orchestral musician, Ogo-Oluwa participated in an international tour to the 10th Stellenbosch International Chamber Music Festival in the same year.

As one of the outstanding students at the MUSON School of Music, he received the David Nwamara prize for best graduating woodwind student in 2015 and was featured as a soloist at the Commonwealth Head of Government Meeting 2015 (CHOGM), held in Malta, where he performed with the commonwealth orchestra.

He has performed various solo and chamber works that span from baroque to modern repertoire. He has also attended masterclasses with flutist Demarre McGill and Diana Baroni, and is currently studying under Patricia Creighton, Flute instructor at Dalhousie University’s Fountain School of Performing Arts. He has already had numerous recital performances and was featured as a soloist with Symphony Nova Scotia, where he performed Chaminade’s Concertino in the family series’ Black Is Beautiful concert, and in symphony week and culture days. He was also a guest performer at the Nigerian Independence Ceremony hosted by the Nigerian High Commission in Ottawa.