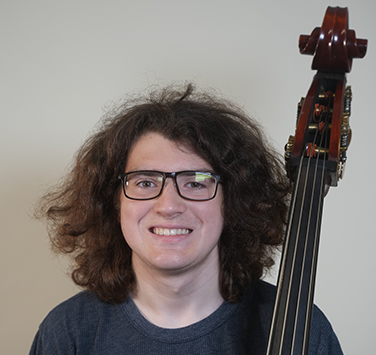 Sean is an (almost) 17-year-old bassist from Halifax in his fifth year with the NSYO. He began his music studies with Suzuki Violin at age five. He fell in love with the bass at his first Symphony Nova Scotia concert. He was very excited when he was finally tall enough to play one. He studies with Lena Turofsky. Sean continues to love the violin, which he studies with Celeste Jankowski. He also studies piano with Lorna Wanzel and sings with Capella Regalis, which is directed by Nick Halley. He is a member of the Maritime Conservatory Chamber Orchestra and has been the organist at the Kings College Chapel. He loves all things related to classical music listening, composition, and score study. He loves classical music so much that he is in the process of changing all the presets on the car’s radio to Symphony Hall.