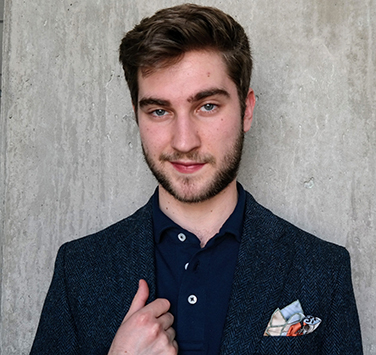 A native of Vancouver, B.C., Zach studied violin and viola with Nicki Stieda, and later with Andrew Dawes, esteemed First Violin of the Orford String Quartet. Zach held the Principal Viola positions at both the Vancouver Academy of Music Symphony Orchestra and the Vancouver Youth Symphony Orchestra from 2011 to 2015. Zach began his studies at Dalhousie in 2015 with Mark Lee (violin) and Philippe Djokic (viola), and completed his final year at Dalhousie under Leonardo Perez (viola). Zach has toured across Canada, Portugal, and Spain with the National Youth Orchestra of Canada since 2014, and was appointed Principal Viola in 2016 and 2019. In August of 2017, Zach represented Nova Scotia in Strings at the National Music Festival Competition in Ottawa.

New music is a particular interest for Zach; on his graduation recital in April 2019, he premiered a work for solo viola composed by his friend and classmate Hisu-Ping (Patrick) Wu. Zach looks forward to performing as a soloist with the Nova Scotia Youth Orchestra in April 2020 as a winner of their annual Concerto Competition. He has performed in masterclasses for distinguished artists such as James Ehnes, Giora Schmidt, Augustin Hadelich, Barbara Barber, Paul Coletti, and Nicolo Eugelmi, as well as the Formosa String Quartet.