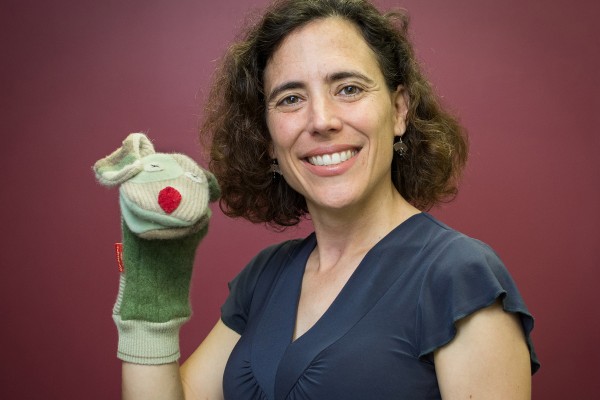 Musical Chairs donor Dr. Marie-Claude Grégoire with one of her puppets

Marie-Claude Grégoire has been a staff Physician and Researcher with the IWK Palliative Care team since 2009, bringing much energy and enthusiasm to her care of children, teens, and families living with life-threatening and life-limiting illnesses. She is known around the hospital to have puppets in her bag and they always bring a smile to people’s faces. Marie-Claude is also an Assistant Professor at Dalhousie School of Medicine teaching Pediatrics and Anesthesiology. She lives in Halifax with her husband, Andrew Dacanay.

Symphony lovers will recognize Marie-Claude’s smiling face. She is a loyal subscriber and a regular in the audience at performances throughout the season. An ardent Symphony supporter, she contributes annually as a Musical Chair donor and participates on the Symphony team in the Bluenose Marathon. She has also included a gift to Symphony Nova Scotia in her will. We recently caught up with Marie-Claude, and she shared her thoughts on her commitment to Symphony Nova Scotia.

How did you become involved with the Symphony Nova Scotia?
“Dr. Dick Goldbloom brought me to the Symphony. I met him in 2009, when he was Chancellor Emeritus and Professor of Pediatrics at Dal. I was a new faculty member and his office was right next to mine at the IWK. That was the year the hospital was celebrating its 100th anniversary with the ‘Concert of the Century’ featuring Symphony Nova Scotia. Dr. Goldbloom encouraged me to go to that. After that, he convinced me to get season tickets and he was always checking up on me to see if I had attended concerts.”

When you think of Symphony Nova Scotia what comes to mind?
“Richness. It’s a treasure we have here. We are so lucky to have this fine orchestra in Nova Scotia. I benefit directly from my support of the Symphony by the wonderful performances… and it is constantly renewing itself! You continue supporting the Symphony and every year you always get a whole new program to enjoy.”

Why do you support the Symphony as a donor as well as a subscriber?
“I started by buying tickets, like a lot of people. But I know that tickets are only one form of support and the Symphony does not live on ticket sales alone. If sales were the only revenue for the orchestra, individual tickets would need to be a lot more expensive than they are and the performances would not be so accessible. Donations help the Symphony remain sustainable and also support important education programs for children and people in the community.”

How did you come to the decision to leave a gift in your will?
“This is something I’m used to talking about as part of my daily work. People need to think about putting a plan in place when they are faced with medical decisions. Wills are often something they need to start working on. I began working on my will when I was starting up Puppet Pediatrics Inc. I was still young and didn’t have a lot of wealth, but I needed a will in place as part of the long-term plan when I incorporated. I had a small family and it made sense to add a few charities as beneficiaries as well.”

What advice would you give to someone considering a gift made by bequest?
“I would recommend giving it some thought. In a will, you make arrangements for the things that matter the most to you. When you appreciate something like the Symphony, you want their work to continue and you want your children and grandchildren to continue to benefit from it.”