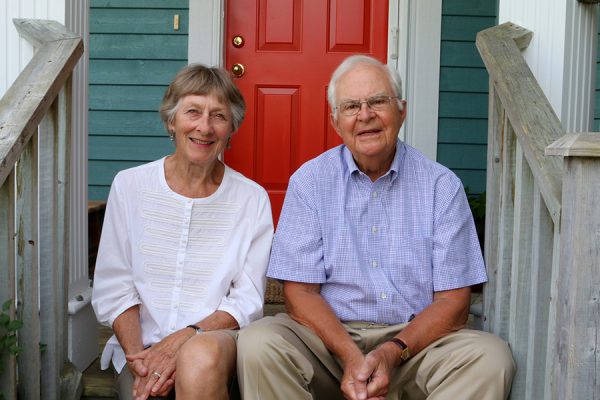 Ted and Joan Cleather moved to Chester in 1994 when Ted retired as Chief Operating Officer at Guardian Trustco in Montreal. Both McGill grads, the couple met in Montreal in the 50’s and went on to live in Toronto and Montreal. They have two grown children and three grandchildren living in the U.S. They are active in their local church choir (Saint Stephen’s) and community choir (the Studio Singers). They have also sung with the Maritime Concert Opera Chorus, touring in Nova Scotia, and with Pierre Perron’s Festival Singers, which took them to Carnegie Hall.

“I come from a musical family,” says Ted. “My grandfather was a professor at the Guildhall School of Music in London and he made his living in light opera and musicals in England. My Uncle also had a long career as a pianist during the 30’s and 40’s in London.

“I loved listening to music growing up,” he continues. “It’s a spiritual thing for me and it has always been a major interest in my life.”

“We had a piano at home and my parents both played,” says Joan. “I’m grateful that I learned to sing at school. That has been a great help in sight-reading music as an adult chorister. I was a member of the junior choir at church, and at university, I sang with the McGill Chorale Society.

“Music is important to me,” says Joan. “It lifts my spirits and makes me feel optimistic and in tune with the world. The community is also very important to me, and the Symphony is vital to the community. It’s perhaps the most significant musical ensemble in the province.”

“Why do you make arrangements for your heirs and the community in your estate plans? You want them to reap the benefits,” says Ted. “We were really the lucky generation, because we were never without a job. We acknowledge our privilege now and want to share it with the next generation. One of the things I want to do is make it possible for them to enjoy the Symphony.”

“Give to something that you have a great interest in or that has the most meaning in your life,” says Joan. “The Arts, education, and health are important to us, and we made provisions for all of them in our wills.”

For more information on Legacy Giving call Elizabeth Smith at 902.421.4402 or email ElizabethSmith@symphonyns.ca.