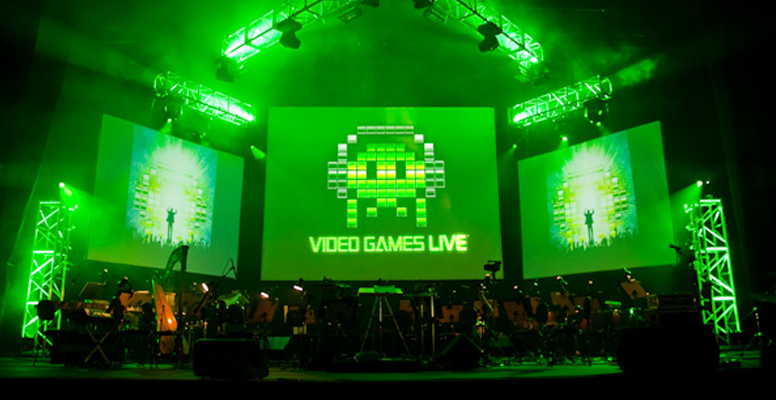 Halifax, NS – Video Games Live takes the gaming experience light years beyond with a “captivating, proudly bombastic show” (The New York Times) that combines music from the most popular video games of all time with full symphony orchestra and choir.

Now, after selling out three Halifax concerts in 2015 and performing for more than two million fans in 400 shows worldwide, Video Games Live returns! Tickets are on sale now for three performances featuring Symphony Nova Scotia and the Soundtrax Choir on April 6, 7, and 8, 2018 at the Rebecca Cohn Auditorium.

These shows are part of Video Games Live’s 12-city 2018 cross-Canada tour, and include exclusive video footage and music arrangements, synchronized lighting, well-known internet solo performers, electronic percussion, live action, and interactive audience segments. It’s an immersive, multimedia concert event that introduces new audiences – families, video game enthusiasts, and non-gamers – to the symphonic experience with the best music and video clips from the most popular games from the beginning of video gaming to the present.

Since its inception in 2002, Video Games Live has been thrilling gamers, families, and mainstream audiences with hundreds of sold-out shows around the globe. It’s been heralded as a “beautiful performance” (USA Today), “ingenious and fantastic” (Los Angeles Times), “simply breathtaking” (IGN.com), “thrilling!” (The London Times) and “a feast for the eyes and ears” (Seattle Times).

Video Games Live was created by industry legend and game composer Tommy Tallarico, who is well-known to Canadian fans as the long-time co-host and co-producer of top-rated gaming TV shows Reviews on the Run and Electric Playground. Tommy is a Guinness world record holder who’s composed music for more than 300 game titles, and he remains personally involved in each Video Games Live performance as producer, on-stage emcee, and guitarist.

“Video Games Live is an incredible opportunity for us to reach an audience that normally may not be familiar with how far video games have come and how amazing the music can be,” says Tommy.

“Our fans in Halifax have been waiting since our 2015 shows, and we’re thrilled that we can bring the show back with a brand-new program!” 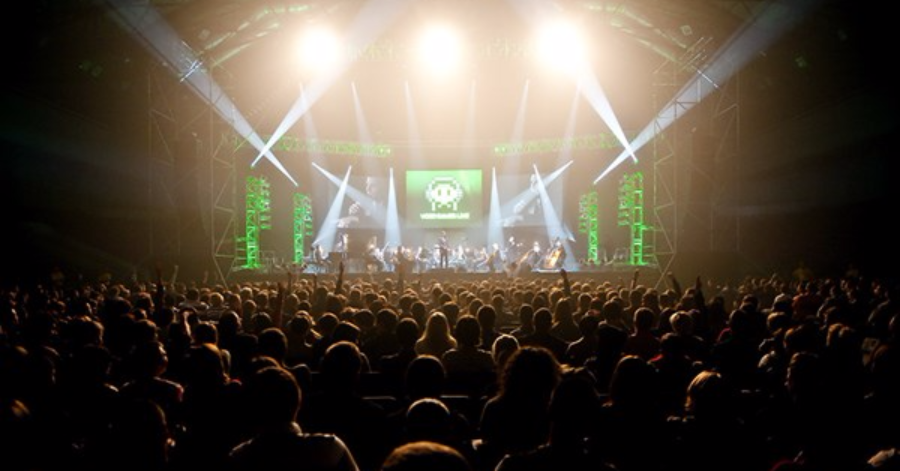 Each performance of Video Games Live spotlights the music that enhances the most gripping video game moments – rescuing the princess, winning the boss fight, saving the galaxy from aliens, or defeating the undead – with performances from recent blockbusters and iconic retro classics. And though each show includes several audience favourites, including a segment dedicated to the old retro arcade games, the final set list for each performance is unique, and is created with the help of local fans on Video Games Live’s page at www.facebook.com.

Each show also features audience participation with special interactive segments, where audience members come onstage and compete while the orchestra plays the music in perfect synchronization with the visuals onscreen.

All concerts include a Pre-Show Festival and Post-Show Meet-and-Greet for all ticket holders. Pre-concert events at 7:00 pm include prize giveaways, a Video Games Live costume contest, with winner to be determined by the audience, and a Guitar Hero competition. The post-show activities include meet and greet opportunities with industry designers/creators, composers/sound designers, voice actors, performers, and more special guests.

A VIP Experience is also available with each ticket. This features special backstage access, a behind-the-scenes tour with Tommy Tallarico, and front-of-line access to the post-show meet-and-greet with performers and special guests. To learn more, visit symphonynovascotia.ca.

Tickets for Video Games Live with Symphony Nova Scotia start at $30, and are on sale now! For more information or to order, call 902.494.3820 or visit symphonynovascotia.ca. 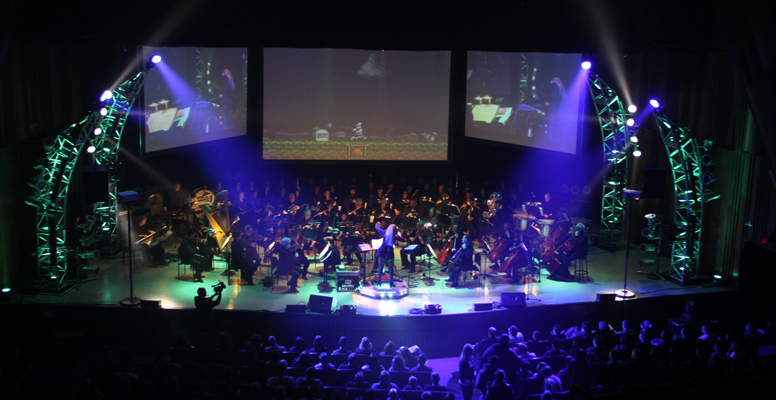 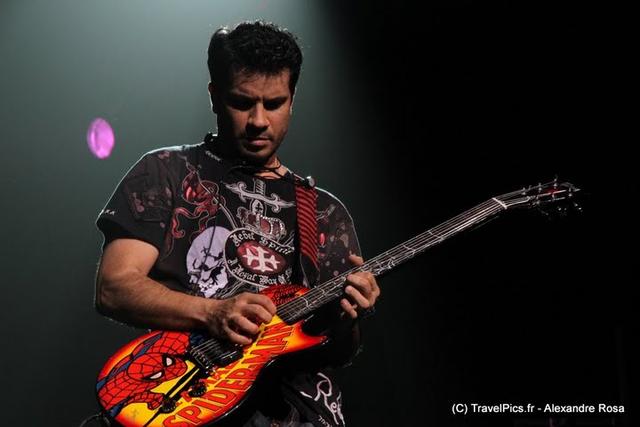 Tommy Tallarico is a veritable video game industry icon. As one of the most successful video game composers in history, he has helped revolutionize the gaming world, creating unique audio landscapes that enhance the video gaming experience. He is considered the person most instrumental in changing the game industry from bleeps and bloops to real music now appreciated worldwide by tens of millions of fans. As a well recognized on-air television personality, live performer, and composer, Tommy brings his in-depth knowledge, years of experience, and love of cutting edge multimedia and video games to the masses. Tommy has worked in the gaming industry as a designer, product manager, producer, writer, games tester, and heads of both music and video departments.

An accomplished musician, Tommy has been writing music for video games for more than 23 years. He has won over 50 industry awards and has worked on more than 300 game titles; to date, they total sales of more than 100 million units and over four billion dollars in revenue. No one in the history of the video game industry has ever worked on more titles and projects. In 2008, he was enshrined in the Guinness Book of World Records with a two-page feature article and interview and currently holds three Guinness World Records, including the person who has worked on the most commercially released video games. In 2012 during the Game Developers Conference he received a Lifetime Achievement Award and is also in the Smithsonian Institute in Washington D.C. for his contributions to the game industry.

In 1994, he founded Tommy Tallarico Studios, the multimedia industry’s largest audio production house. In video games, television, film, radio, soundtracks, toys, and even on floats in the New Years Day Rose Parade in Pasadena CA, Tommy’s music has been heard by hundreds of millions of people around the world. Tommy is a cousin of rock star legend Steven Tyler (nee Tallarico) and in 2002 Tommy’s music was used as the opening song for Aerosmith’s “Girls of Summer” world tour. His top titles include Earthworm Jim, Tony Hawk’s Pro Skater, Disney’s Aladdin, Spider-Man, and Metroid Prime, as well as top-selling popular game franchises such as Sonic the Hedgehog, Pac-Man, Madden Football, Mortal Kombat, Time Crisis, Unreal, Lineage, James Bond, Blitz Football, Knockout Kings, Test Drive, Scooby Doo, WWE, and Twisted Metal. His score for Advent Rising has been noted as “one of the greatest musical scores of all time” by websites such as Yahoo, Gamespot, and others.

Tommy has been featured on numerous national and international television shows, appearing repeatedly on CNN, FOX, and MTV. Tommy hosted, wrote and co-produced the top-rated and very popular Reviews on the Run/Judgment Day television show, as well as the longest-running award-winning video game television show, The Electric Playground (www.elecplay.com), which has been on the air since 1997. The show is syndicated worldwide and airs daily in prime-time. The Electric Playground won the 2001 Telly Award for “Best Entertainment Cable Program”. In 2006, Tommy hosted and helped to launch the worldwide Championship Gaming Series for DirecTV. His national U.S. television debut came in 1994 when he was featured and asked to guest host ABC’s “In Concert” television program which included artists Peter Gabriel and Todd Rundgren. From 1991 to 1994, he headed Virgin Interactive’s music and video division, and executive-produced numerous video game green-screen shoots for films including “Demolition Man” where he worked with Sylvester Stallone, Wesley Snipes, and Hollywood producer Joel Silver.

In 2002, Tommy created the critically acclaimed Video Games Live (www.videogameslive.com), an immersive audio-video concert experience celebrating video games. Video Games Live is the first and most successful video game touring concert in the world, having performed over 400 shows in 42 countries on 5 continents. The debut performance was launched on July 6, 2005 at the world-famous Hollywood Bowl in Los Angeles with the LA Philharmonic. Over 11,000 people attended, making it the biggest video game concert in the world at that time (since then, they have performed to over 40,000 people in places like Taiwan and China). Most of the game music played during the initial launch of the show had never been performed live anywhere in the world. Since then over two million people have experienced the show live.

Born February 18, 1968 and raised in Springfield, Massachusetts, Tommy moved to Southern California on his own at age 21 to pursue a career in entertainment. Homeless with no means of financial support, he was discovered in a music store and started working in the video game industry within three days of arriving in California. All four of his grandparents came to America from Italy in the early 1900s and instilled a great sense of hard work, compassion, appreciation, passion, dreaming, creativity, and love for others that he has carried with him his entire life. Tommy is a proud vegan and has been a spokesperson, supporter, and contributor for many animal rights organizations. In his spare time he enjoys nature, photography, traveling, cooking, video games, comic books, being a kid, and meeting new people. His popular website www.tallarico.com has received over 250 million hits by more than 10 million unique users.