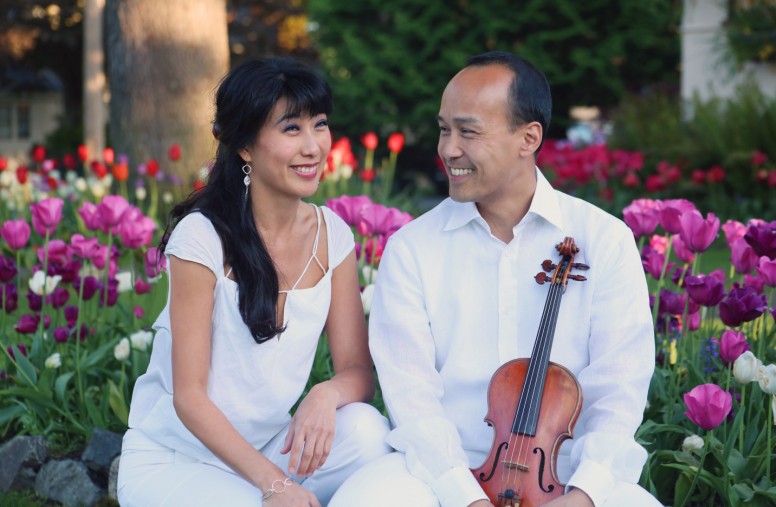 After launching his career across Canada and around the world, former Symphony Nova Scotia Concertmaster Terry Tam returns “home” to Halifax for a rare joint performance with his wife, pianist Lorraine Min, on Thursday, February 26 at 7:30pm at the Rebecca Cohn Auditorium.

Tam served as Symphony Nova Scotia’s Concertmaster from 2002 to 2006, and during his time in Halifax, he became well-known as both an accomplished violinist and an emergency room physician at the QEII.

His wife Lorraine was also a prominent local performer, and in addition to a teaching role at Dalhousie, maintained a busy international touring schedule as a concert pianist.

The pair currently live in British Columbia, where Tam serves as Concertmaster of the Victoria Symphony.

“We are delighted to be returning to Nova Scotia to perform with Maestro Gueller and Symphony Nova Scotia,” says Tam.

“We have such fond memories of our time in Halifax and of the rich cultural environment that we were able to take part in for years.”

Together, Tam and Min will perform Mendelssohn’s Concerto for Violin and Piano with Symphony Nova Scotia.

“This will be our first performance of this rarely heard but wonderful work,” says Tam.

“It is a musical gem, full of vitality, charm, and romance, and a technical tour de force for both instruments. The audience is in for a real treat!”

The concert will also feature Beethoven’s beloved “Pastoral” Symphony, a warm and expressive journey through nature.

Terence Tam, violin
Consistently praised for his intense musicality and impressive technique, Canadian violinist Terence Tam has performed in Canada, the U.S., Australia, Europe, and Japan as a recitalist and chamber musician.

Tam made his New York debut at Carnegie Recital Hall in 1994 and his Paris concerto debut in 2000 playing the Ligeti Violin Concerto with the Academy of 20th Century Music Orchestra. His CD recording of Dutch composer Wim Zwaag’s Violin Concerto was chosen as one of CBC In Concert’s best classical recordings of 2011.

Currently concertmaster of the Victoria Symphony, he also previously held this prestigious position with the Adelaide Symphony Orchestra in Australia and Symphony Nova Scotia.

An active chamber musician, Tam’s performances have taken him to the Sarasota, Ravinia, Meadowmount, Banff, Aspen, Encore, Hamptons, Scotia Festival, and La Conner music festivals. He has collaborated with musicians from the Juilliard, St. Lawrence, Ying, and Pacifica string quartets.

In recent seasons he has been featured as guest violinist at the Montreal Symphony’s La Viree Musique Festival, the Sweetwater Festival in Ontario, Music in the Morning in Vancouver, the New Brunswick Summer Music Festival, the St. Cecilia Concert Series in Halifax, the 35th International Viola Congress in Australia, and at the Eine Kleine Summer Music Festival in Victoria.

Tam is also a recipient of numerous grants from the Canada Council for the Arts as well as the Chalmer’s Foundation of the Ontario Arts Council.

Tam studied at the Glenn Gould School of Music Toronto where he completed a double major with full scholarships in violin and piano. Subsequently, he pursued post-graduate studies at the Peabody Institute of Music in Baltimore as well as the Hochschule fur Musik “Hanns Eisler” in Berlin, Germany.

Tam regularly gives master classes and chamber music coachings across Canada. He is a faculty member of the annual summer Symphonic Orchestra Academy of the Pacific in British Columbia and has also taught at the Elder School of Music at the University of Adelaide.

Lorraine Min, piano
A Steinway Artist and critically acclaimed pianist, Lorraine Min has dazzled audiences internationally with her poetic artistry and brilliant virtuosity. Cited by the New York Times for her “impeccable phrase-shaping (and) crystalline sound,” and by the Washington Post for her “admirable playing,” Min has performed extensively throughout Canada and the U.S., as well as Germany, France, the U.K., Italy, Switzerland, Australia, India, and South America.

She has performed solo recitals and has made concerto appearances in some of the world’s most important concert halls, such as New York’s Avery Fisher Hall, Alice Tully Hall, Town Hall, Carnegie Hall, Merkin Hall, the Kennedy Center’s Concert Hall, Vancouver’s Orpheum Theatre, and the Chan Centre, to name only a few.

A dynamic chamber musician, Min has performed in prestigious North American venues including at the Ravinia and Tanglewood Festivals, and in Europe, Asia, and Australia, notably in Perth’s Western Australia Symphony Orchestra’s Amberley Mozart Day concerts, where she was a featured guest artist. She can regularly be heard on CBC and ABC (Australian) radio.

Min’s success in prestigious international competitions includes top prizes and special awards of distinction in the Washington International, D’Angelo, Frina Awerbuch, and the William Kapell Competitions. She was the top ranking Canadian pianist at nineteen years old in the Harvey’s Leeds and Busoni International Competitions, and laureate in the Van Cliburn Competition.

Min’s discography includes her solo CD of Schubert and Liszt and a CD featuring chamber music of Beethoven and Brahms for Canada’s esteemed Eine Kleine Music Festival. In 2013, Min released two CDs, her subsequent solo CD, “In Recital” which features works by Chopin, Liszt, and Bartok, as well as a CD of Violin and Piano Sonatas by Franck, Debussy, and Prokofiev.

Born in Victoria and raised in Vancouver, Min studied on full scholarship at the Peabody Institute of Johns Hopkins University and earned her Bachelor degree, Pi Kappa Lambda. On generous scholarships and numerous grants from the Canada Council for the Arts, Min received her Master’s and Doctoral degrees from the Juilliard School.