Concert to feature lineup of Schubert’s most popular songs, performed by Canadian mezzo-soprano Andrea Ludwig, and recorded for a new CD

The concert also includes highlights from Schubert’s ballet Rosamunde, alongside his frolicking, exuberant Symphony no. 3.

“This concert will really be very special,” says Maestro Gueller.

“These are not only works by Schubert, but also works orchestrated by some really great and well-known composers, like Britten, Berlioz, Webern, and Max Reger. Two of these songs will also be orchestrated by young, living Canadian composers.”

Franz Schubert (1797–1828) has been called the greatest songwriter who ever lived, with an unparalleled gift for beautiful melodies and emotional depth. He wrote more than 600 songs over the course of his short career, and his work helped to establish the art song, or lied, as a musical form in 19th-century Germany. These songs often used romantic German poetry for their lyrics.

Most of Schubert’s songs were originally written for solo singer and piano, but over the past 200 years, many composers have been inspired to write orchestrations of his songs for singer and orchestra. Some of the most well-known orchestrations will be featured on this concert, including:

The two Canadian composers featured on the concert are Kati Agócs and Brian Current, both established composers with multiple awards and accolades to their credit.

Current was the winner of the 2015 Juno Award for Classical Composition of the Year, and Agócs has been praised for her “music of fluidity and austere beauty” (Boston Globe) and compositions that are “striking” and “filled with attractive ideas” (The New York Times). They have each written one brand-new orchestration for this concert:

Each of the Schubert songs will be sung by Canadian mezzo-soprano Andrea Ludwig. Born and raised in Regina, Saskatchewan, Ludwig has been praised for her “tones of silver and gold” (The Chronicle Herald) and has performed with the Toronto Symphony Orchestra, the Canadian Opera Company, the Edmonton Opera, the Philadelphia Opera, and more. She has performed on two previous occasions with Symphony Nova Scotia, and both concerts were critically acclaimed audience favourites. The Chronicle Herald’s Stephen Pedersen said:

The entire concert will be recorded by Symphony Nova Scotia for a new CD release. The CD will be launched in September 2016, but pre-orders will be available at the concert.

Tickets are on sale now! Prices begin at $30 (HST included), and under-30s pay only $16. Plus, you can save up to 35% by purchasing a ticket package. Tickets are available at the Dalhousie Arts Centre box office (6101 University Avenue, Halifax), at 902.494.3820, or online at symphonynovascotia.ca.

Behind the scenes with Maestro Gueller: Symphonic Schubert 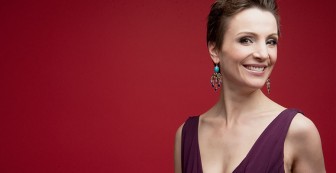 About Andrea Ludwig
Born and raised in Regina, Saskatchewan, mezzo-soprano Andrea Ludwig is an artist of tremendous depth, musicality, and scope. Her charm, warmth, and easy sense of humour are perfect for the stage and her vibrant musicality makes her a favourite to all her audiences. Her versatility and ability to interpret many styles are impeccable.

Hailed by Halifax Chronicle Herald critic Stephen Pedersen as having “tones of silver and gold”, Andrea has appeared with the Canadian Opera Company in numerous roles including Nireno in Handel’s Julius Ceasar, the Second Niece in Britten’s Peter Grimes, Flora in The Turn of the Screw, Moira in Paul Ruder’s The Handmaid’s Tale, and Liesgen in Bach’s Coffee Cantata.

Very much in demand for contemporary opera, Andrea has been involved in many of Tapestry New Opera’s projects including their LibLab and Opera Briefs as well as the world premiere of Juliet Palmer’s Shelter at Edmonton Opera in 2012 and again in Toronto in 2014. Also, as part of the multi-Dora-nominated Queen of Puddings production of Ana Sokolovic’s Svadba – The Wedding, she performed at its world premiere in Toronto in 2011, in France, Serbia, and Ireland in 2012, and then at Edmonton Opera and Philadelphia Opera in 2013. This past summer, she performed Svadba at the Festival d’Aix-en-Provence.

Ludwig’s commitment to concert performance remains a strong focus. She made her debut with Symphony Nova Scotia in January 2011 in R. Murray Schafer’s Adieu, Robert Schumann and made a return to the Symphony in February 2013 in a tribute concert to Peter Lieberson in which she sang his Neruda Songs. She has also performed Gustav Mahler’s Das Lied von der Erde with Kindred Spirits Orchestra, Handel’s Messiah with Symphony New Brunswick and at The Festival of the Sound, Mozart’s Mass in C Minor with the Amadeus Choir of Toronto and the Regina Philharmonic Chorus, Mozart’s Requiem with the Thunder Bay Orchestra, Beethoven’s Ninth Symphony with the Toronto Symphony Orchestra, and a concert tour and recording project of Peter Togni’s Responsio with Jeff Reilly, Suzie LeBlanc, Charles Daniels, and John Potter.