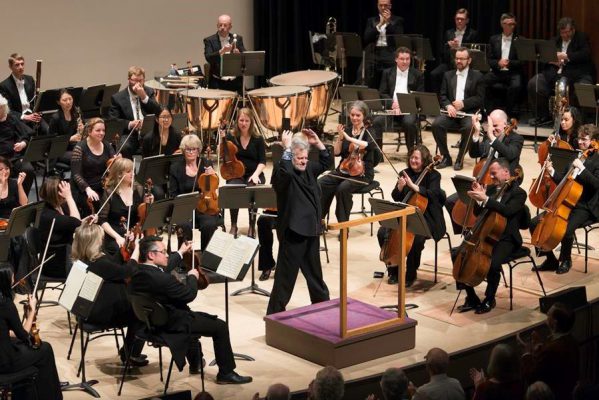 HALIFAX, NS – Symphony Nova Scotia’s 2016/17 Annual General Meeting, held September 25, 2017 at the Dalhousie Arts Centre, reported a very strong season, with record ticket sales and donations, expanded community outreach programs, and the launch of its new donor Legacy Circle. It also reported the ongoing search for a new Music Director to succeed the much-loved Maestro Gueller, who will move into the role of Conductor Laureate after the 2017/18 season.

A major success in 2016/17 included an increase of 15% in ticket revenue over 2015/16, following annual increases of 6% and 17%, respectively. Throughout the 2016/17 season, which ran from September through May, the orchestra sold almost 42,000 tickets, an increase of 7% over the previous season. The orchestra also presented a record 58 performances, including three sold-out concerts each for astronaut Chris Hadfield, Canada’s Ballet Jörgen, The Music of the Beatles, and The Piano Men: The Music of Billy Joel and Elton John.

Donations from individuals to the Symphony also saw continued strength in 2016/17. Thanks to the generosity of the Symphony’s many supporters including corporate sponsors, private sector contributions continued to provide over 33% of the Symphony’s annual revenue. The orchestra also welcomed 36 members to its new Legacy Circle, a group of committed donors who have indicated their wish to leave gifts in their estate plans.

Symphony Nova Scotia also saw a high level of artistic success throughout the 2016/17 season. A special donation from Symphony supporters and local philanthropists Margaret and David Fountain allowed the orchestra to perform a sold-out concert with the acclaimed London Festival Opera. The orchestra also performed a brand-new work by the JUNO-Award winning composer/conductor Dinuk Wijeratne in his role as Symphony Nova Scotia’s RBC Composer in Residence, a position supported with funding from RBC’s Emerging Artists Project. Another artistic highlight was the release of a brand-new Symphony Nova Scotia recording entitled Schubert, featuring a rich selection of the composer’s orchestrated songs, including two new commissions from Canadian composers.

2016/17 also marked Maestro Bernhard Gueller’s second-last season as Music Director of Symphony Nova Scotia. The search for his replacement continued under the direction of an internal Music Director Search Committee, with collaborative input from patrons, musicians, Board, and staff. The orchestra welcomed six promising guest conductors throughout the season, and several candidates will return in 2017/18. Maestro Gueller’s tenure as Music Director will conclude in May 2018 with a special two-concert performance of Beethoven’s Ninth, after which he will continue with the orchestra in the new role of Conductor Laureate.

The Symphony’s 2016/17 season also included a wide variety of community outreach programs throughout Nova Scotia, including its popular student matinees, the Classical Munchkins program, and free community concerts. The free Family Series saw another highly successful year, with almost 2,500 attendees creating filled-to-capacity audiences for each of the seven performances, and a new Seniors’ Concert series, which welcomed almost 600 seniors to free performances on Tuesdays.

Another highlight in 2016/17 was the ongoing success of the Symphony Nova Scotia Foundation, which is currently valued at over $13 million. Thanks to careful management by the Foundation Board, including Chair Dale Godsoe, treasurer Alan Barkhouse, and secretary Tim Matthews, the Foundation’s transfer of $654,000 in 2016/17 was a crucial factor in the overall financial success of the season. The Symphony continues to focus on building and strengthening the endowment for the future.

Challenges faced in 2016/17 included a continued freeze in public sector support, and a reduction in engagement with public schools due to the labour dispute between teachers and the province.

Symphony Nova Scotia is Nova Scotia’s orchestra. With a home base in Halifax and performances across the province, Symphony Nova Scotia reaches more than 50,000 Nova Scotians of all ages each year with a diverse mix of concerts, free community programs, and educational outreach. Under the thoughtful and dynamic leadership of Music Director Bernhard Gueller, it is the largest employer in Nova Scotia’s cultural community, and has won many awards, including five East Coast Music Awards for classical music. Visit symphonynovascotia.ca to learn more, listen online, or get tickets today!