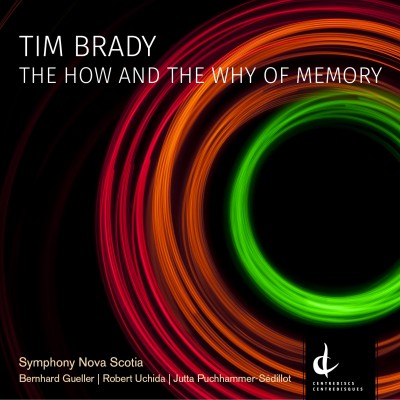 Orchestra wins for collaboration with Canadian composer Tim Brady, entitled The How and the Why of Memory

Halifax, NS – Symphony Nova Scotia is the winner of the 2016 East Coast Music Award for Classical Recording of the Year.

The ECMA was awarded to Symphony Nova Scotia’s record The How and the Why of Memory, released by Centrediscs in September 2015.

“We’re so honoured to be recognized with an ECMA for this exciting and rewarding project,” says Chris Wilkinson, CEO of Symphony Nova Scotia.

“This record was a four-year journey for us, and one that wouldn’t have been possible without the support of so many dedicated partners. We’re very grateful to composer Tim Brady, along with our two brilliant soloists, our Music Director Bernhard Gueller, and our fantastic musicians. We’d also like to thank the teams at Centrediscs and CBC, our producer Jeff Reilly, our recording engineer Rod Sneddon, and the incredible audience at these live recordings.”

The three symphonic works performed on The How and the Why of Memory include:

The record’s two featured soloists, Robert Uchida and Jutta Puchhammer-Sédillot, are both prominent Canadian performers. Uchida served as Symphony Nova Scotia’s Concertmaster from 2006 to 2013, and since then has been Concertmaster of the Edmonton Symphony. He has been praised for his “ravishing sound, eloquence and hypnotic intensity” (Strings Magazine), and has been heard throughout North America and Europe as a soloist, chamber musician, and concertmaster to great acclaim.

Jutta Puchhammer-Sédillot is also a fixture on the Canadian classical music scene, teaching at the Université de Montreal, releasing several critically acclaimed recordings, and serving as President of the Canadian Viola Society. Her virtuoso performance on this recording received particular praise for its “cocoa-coloured sound and brilliantly lyrical playing” (The Whole Note).

Additional praise for The How and the Why of Memory includes:

Symphony Nova Scotia will release its next record, an exploration of music from beloved composer Franz Schubert, in the summer of 2016.

About Tim Brady
Based in Montreal, Tim Brady is a Canadian composer, electric guitarist, and producer who creates music in a wide range of genres, including orchestral music, chamber opera, contemporary dance scores, jazz, and free improvisation.

Since 1988, Tim Brady has released 20 CDs as both a composer and a performer. He is also the founding president of the Canadian New Music Network, serving from 2005 to 2014.

Behind the scenes of “The How and the Why of Memory”