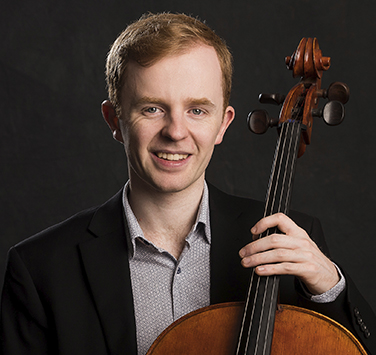 Aiden Russell, a cellist from Ottawa, Ontario, joined the cello section of Symphony Nova Scotia in September 2022. Aiden has had the opportunity to learn from many of the world’s elite artists including Marin Alsop, Astrid Schween, Peter Wiley, Steven Doane, Johannes Moser, Brian Manker, Joe Johnson, Rachel Mercer, and Brannon Cho. In 2021, he competed in the National Arts Centre Bursary Competition and was awarded the Crabtree Foundation Award which supports a candidate in pursuit of an orchestral career. Aiden is an alumnus of the National Youth Orchestra of Canada, the Bowdoin International Music Festival, the International Cello Institute, the National Academy Orchestra of Canada, and the National Arts Centre Orchestra Mentorship Program.

Growing up, Aiden would travel to Halifax every summer to visit family. These trips fostered a very special bond between him and the East Coast. He is thrilled to return to Halifax as a member of Symphony Nova Scotia.

When did you begin playing your instrument?

I began taking cello lessons when I was 10 years old. This was also the year I began to study marital arts. I still enjoy practicing martial arts in my spare time.

What’s a piece we should listen to, And why?

The second movement of Beethoven’s fifth Piano Trio is a piece that I think everyone should experience. It has been nicknamed the “Ghost” trio, as the atmosphere that Beethoven creates is hauntingly beautiful. I always listen to this piece on Halloween!

What do you like to do in your spare time?

My favourite thing to do in my spare time is playing board games like “Settlers of Catan” and Cribbage.