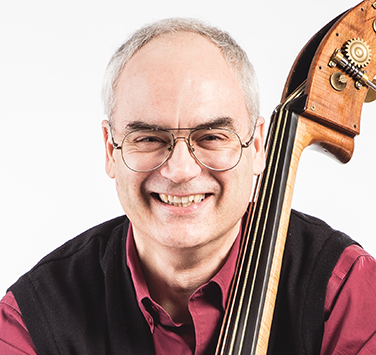 As well as occasionally hosting Symphony School concerts and narrating “Peter and the Wolf” too many times to count, he has acted as MC for many events in the community over the years and was one of the hosts for the Symphony’s “Musically Speaking” concerts. Of course, his first passion is the Double Bass, which he began playing in the Toronto public school system at the age of ten. The rest just seemed to fall into place…

He has been on the faculty of Dalhousie University and has been a guest artist at the Scotia Festival of Music many times. Max has been an Orchestra Representative on the Symphony’s Board of Directors and was the Chairman of the Symphony Players’ Association for many years.

Max is currently serving a two-year term on Symphony Nova Scotia’s Board of Directors as Musician Representative.

How long have you played the bass?
I’ve played it since age ten.

Why did you start playing the bass?
I began playing it because I thought it was cool! (Hey, I was ten!)

If you couldn’t be a musician, what would you like to do?
Well, I like to think that I will always be a musician, even if I am not playing music. But If I could not play then I’d like to either be a bow-maker, or an electrician. I quite like that sort of thing.

What kinds of music do you enjoy listening to?
I rarely listen to classical music. It was a conscious decision of mine as a student. I figured that I’d be playing these pieces for the rest of my life, so to keep things fresh for me I left them alone. I like singer/songwriter stuff: Bob Dylan, Joni Mitchell, Sting, etc. I also like African music; particularly Salief Kieta as well as music from Zimbabwe. As with any musician, the problem is trying to keep the music collection from taking over the house. Every so often I have to “cull” the CDs, just to make room for new ones!

What’s your favourite food?
Chocolate and pizza (not necessarily together).

What’s the best thing that ever happened to you?
Esther Ricketts!

What people have been the greatest influence on you?
My parents are first on that list; but as a musician it would have to be my first private teacher: Boris Kersting. He really had a wonderful attitude toward music and life in general. It is because of him that I am a professional musician today, and because of him that I still enjoy it so much.

In this episode of Symphony 101, Max explains how string instruments make their sound using a cigar box!

Recently, Max shared with us some of the non-classical music he likes to listen to to cheer himself up or to keep the good feelings going! Listen on Spotify, and click here to read more about why he likes each song.