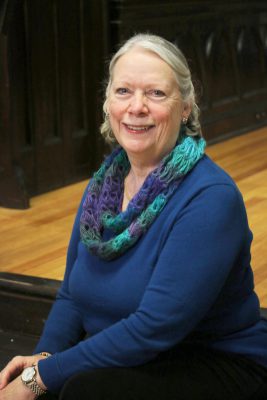 Iona MacLean is relatively new as a regular at the Symphony, but her face may be familiar for a few reasons. A retired Presbyterian Minister, she moved to Halifax in 2015, and is currently working at the Church of Saint David on Grafton Street. Some may also recognize her from the stage as a member of the Symphony Nova Scotia Chorus. This is her third season performing with the orchestra, and her performances include Messiah, Beethoven’s Ninth in May 2018, and Mozart’s Mass in C Minor in May 2019.

It was a season subscription that brought Iona into the Symphony community four years ago, and it is something she continues to enjoy and support with enthusiasm.

“A Symphony concert is a wonderful experience” she says. “It stretches you. Sometimes it comforts you.

“Watching the musicians play, as well as listening to what they’re producing, has been an amazing education and inspiration. I’m just fascinated by the effort and the skill and the passion.

“Clearly music offers opportunities – for relaxation, for entertainment – but even more, it can be an experience of something mysterious that takes us out of ourselves. One of the best parts of my involvement with the Symphony has been the chorus. That’s been quite thrilling. Singing has always been a means of expressing things for me that are inexpressible in other ways.”

The daughter of a Presbyterian Minister, Iona grew up in Halifax and began singing at an early age.

“Music was always around,” she says. “I took piano lessons as a child, as most kids in those days did, but I switched to voice lessons when I was about 13 and that became a passion.” Growing up in the folk music era, she and all her friends had guitars and sang in groups. She also joined the Armdale Chorus, which was a great experience for her through high school and university. It was a 40-voice professional women’s chorus that performed around the community and at conventions in the local hotels.

Iona graduated from Dalhousie with a Bachelor in Psychology, and went on to study Theology at Knox College in Toronto. There, she also went to the Royal Conservatory to complete her ARCT in Voice and to upgrade her piano. “I went to Grade 8 in piano,” she says, “so it’s handy – but it’s not my great talent.”

Married in 1983, Iona and her husband, Glenn Cooper, were both ordained ministers who served for a time in Ontario and eventually settled in Pictou, where they lived for over 20 years. During that time, they would occasionally travel to Halifax for Symphony concerts. They shared a deep love of music and were very involved in the local community, singing in a small chamber group for a number of years. Glenn also had a background in broadcasting, and he put together a radio program called Hymn Book that aired in Antigonish, New Glasgow, and Ontario.

Glenn passed away in 2013, and Iona retired in 2015 after 23 years as Minister of the First Presbyterian Church in Pictou. When she moved to Halifax, her congregation presented her with a parting gift – a Symphony subscription for the 2015/16 concert season.

“It was a hard transition that year,” she recalls, “moving to Halifax and dealing with the loss of my husband.

“I missed so much the chorale work that I had been doing in Pictou and I missed my Glenn. They gave me 10 U-Pick Symphony concerts of my choice, and it was a brilliant gift!”

Attending the Christmas oratorio concert brought about a decisive moment for Iona. “I remember watching the Symphony Chorus and thinking, ‘I see gray hair on that stage… I think I can do this again!’ That was the moment. It took me a while to audition, but that was when I started thinking about getting involved in singing again. So, the U-Pick subscription was a brilliant gift. They couldn’t have gotten anything more suitable for me!”

“I also have a very personal motivation for donating. It is a way of bringing my husband into it because I make the annual donation in his name – in his memory. Music was very important to Glenn. I like looking at the House Program and seeing his name listed because it feels as if he’s here.”