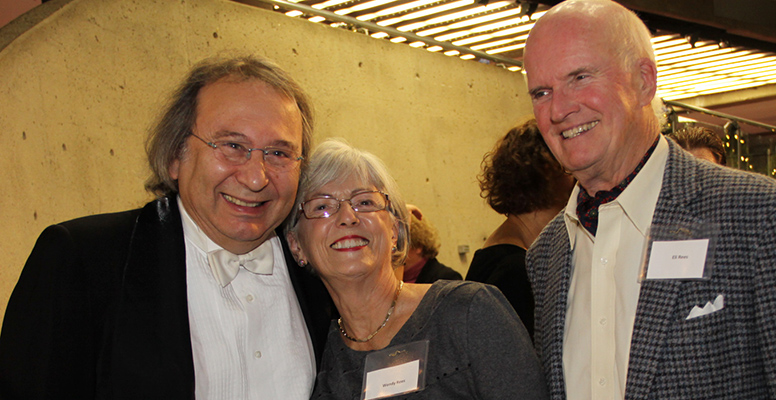 Wendy and Eli Rees enjoy a cozy moment with Assistant Principal Cello, Shimon Walt, at a post-concert reception. Wendy has volunteered on the Musical Chair Committee for five years, chairing it for the past three. She recently shared her thoughts on why it has become so popular with Symphony supporters.

“As a committee, we try to get the message out to as many Symphony Nova Scotia supporters as possible. The Musical Chair program is an added bonus to give them a personal connection to the orchestra. We talk to people that we really feel would be interested in that connection.

“It started out as a unique fundraiser – something music lovers could really get involved with, instead of just donating money.”

Musical Chair donors are given a number of opportunities throughout the season to meet and get to know the musicians. There are regularly scheduled post- concert receptions and access to some of the work behind the scenes at rehearsals.

“Eli and I had already known Shimon for many years when we joined the Musical Chair program. Since then, we have met a lot more of the musicians and gotten to know them on a first name basis. I remember when Kerry and Dominic first joined the orchestra. It was nice to be able to welcome them to the Symphony and to Halifax and we really enjoyed getting to know them over the years.

“The receptions give you the chance to talk to the musicians about the music and the performance that you have just experienced. It’s also nice to stop in for a snack and chat with some of your fellow supporters.”

Wendy is also a big fan of the onstage passes.

“Rehearsals are an amazing experience. What an education! You are sitting onstage with the orchestra and you get to watch the process from a musician’s perspective. You get to see the conductor’s face, his expressions, and the subtleties of his direction. It’s amazing to see how one section of one piece comes together; the amount of detail discussed between the conductor and the musicians and to see everyone picking up mid-piece and playing on cue, over and over until it’s perfect. “

Musical Chair donors participate for many reasons, but for Wendy the ultimate reward is evident at every performance.

“Sitting in the Rebecca Cohn watching the many musicians that you’ve come to know so obviously enjoying what they are doing.”

Wendy has dedicated years of time and energy to the program and has enjoyed being a part of its evolution.

“It grew quickly and became larger than anyone had expected. It started with the Masterworks Series. Then there was a point where the number of donors exceeded the number of musicians. Within a few years, we added the Fusion and Baroque Series as more people wanted to be involved.”

“There are still plenty of Musical Chair openings for the upcoming season! The most efficient way to get into the program would be to give Anne a call.”