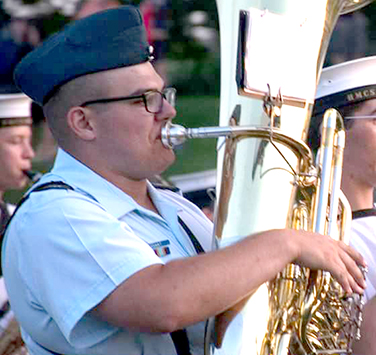 Music has always been a part of my life. In Grade 4, I picked up the cello through the school music program. Music has only grown in my life since then. In Grade 6, I joined the band on tuba. I played in the band program and string program for the rest of my school career. In Grade 7 I joined cadets. They really brought out my musical potential. Then, I went to band camp for a few summers. There, I discovered composing music. My first composition was (kind of) a march. I had only just started learning music theory at the camp and didn’t really know much about harmonies and melodies. In Grade 9, I entered the Halifax Regional Arts Composition Competition in the Junior High Category. That’s where I wrote my first symphony. It was only one movement and about 3 minutes. I won first place. That’s when my composing really took off. I took that as motivation to continue writing music for others to hear. One year, at cadet band camp, I taught myself trombone and played that in jazz band. In high school, I started to write more marches. I gave them to my band teacher, and he got the band to play them. In Grade 12 I played trumpet in the jazz band.

The reason I love music and writing is that it’s like an escape from the real world. It expresses emotions that words can’t. Music has helped me through tough times. It’s made me happy, sad, and it’s given me goosebumps. To continue my career in music, I want to go to university for music composition. It will build up my composing skills and help me become better and faster. When I graduate, I’d like to become a professional Tuba player. I’d like to travel the world and play with different orchestras.