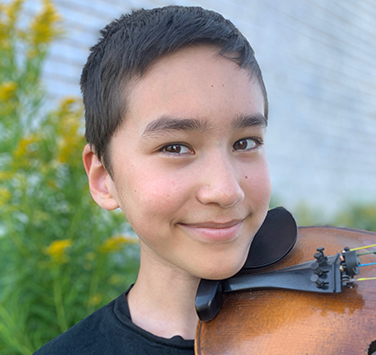 Fergus is 13 years old and recently moved to Nova Scotia from British Columbia, where he was a student at École Élémentaire Sunshine Hills in B.C. The 2021/22 season is Fergus’ second year with the NSYO.

Fergus began playing violin when he was five years old with instructor Dominic Woo, the Concertmaster of the Vancouver Metropolitan Orchestra. Through Dominic’s inspiration and expertise, Fergus has developed an appreciation and love for violin and classical music. Playing violin has now become a major part of Fergus’ life. Fergus has enjoyed performing at a variety of venues, including Christmas concerts, daycares, nursing homes, and neighbourhood gatherings.

In 2016, Fergus joined the Vancouver Youth Symphony Orchestra as one of its youngest violin players. He was with the VYSO for four seasons until his recent move to Nova Scotia. Fergus’ favourite violin player is Ray Chen, an Australian violinist. He follows Ray Chen on YouTube, and is hoping to one day meet Ray Chen in person.

Fergus enjoys travel. He has traveled in Europe, Asia, and the Americas. Fergus also loves outdoor activities including hiking, biking, and being immersed in a variety of natural settings. Fergus is also an animal lover, and enjoys sharing company with animals. Fergus is very much looking forward to his second season with NSYO.