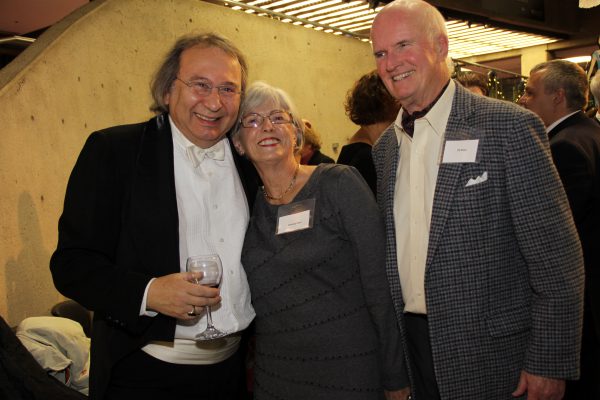 I was dragged to my first symphony performance… by a friend!

Obviously, my friend was not literally pulling me by the arm, but I can honestly admit that I was less than enthusiastic at the prospect of going. My knowledge about orchestras was limited and it didn’t seem like something that would interest me.

I was wrong. Forty years later, I look back and think how grateful I am to her for the pleasure I receive from attending concerts and the privilege I feel at being able to support the orchestra and its musicians. Many of the musicians have been involved for as long as I have and that speaks to the sense of connection we feel for each other.

“Max and I have been with the orchestra a long time and people recognize us. People are always stopping us and talking about how we look like we’re having such a great time on stage and it’s true! I love that moment when a big piece finishes – sometimes there’s this pause and everything is quiet for a few seconds before the audience starts clapping. Sometimes they all jump to their feet or someone in the balcony shouts out to us. It’s a lot of fun to be a part of that.”

Only 3% of all Canadian donors donate to the arts. That makes you and I part of a small but important group of people who know that arts organizations like the Symphony enhance lives and the community.

Imagine what could be possible if we increase the number of donors in Halifax? You can help by inviting a friend or colleague to consider becoming a Musical Chair.

“Dr. Dick Goldbloom brought me to the Symphony. I met him in 2009 when he was Chancellor Emeritus and Professor of Pediatrics at Dal. I was a new faculty member and his office was right next to mine at the IWK. That was the year the hospital was celebrating its 100th anniversary with the ‘Concert of the Century’ featuring Symphony Nova Scotia. Dr. Goldbloom encouraged me to go to that. He was really good at selling Symphony Nova Scotia. After that, he convinced me to get season tickets and he was always checking up on me to see if I had attended concerts. Now I bring my son Oscar to the family series.”

Our donations help families and schools bring children to concerts and outreach programs, planting seeds of enjoyment that may bloom later.

“Music has been in my life since I was a child, and it was there helping me grow over the years. To stop playing would be the same as to stop eating food.”

Music may not sustain life, but it is certainly food for the soul and is nonetheless something that many people can’t live without. As a Musical Chair, you can be proud of the impact that your generosity has, enabling these talented musicians to share their skills throughout the province. I encourage you to renew your support, increase your giving if you can, and tell your friends about this gem in our midst.

Thank you for your continued support of Symphony Nova Scotia.

P.S. By sharing the symphony with me, my friend opened my world to decades of pleasure. Thank you for investing in our community and in providing joy for others.