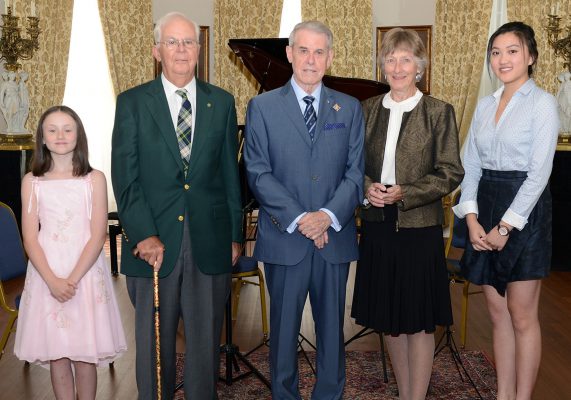 His Honour the Lieutenant Governor of Nova Scotia (center) is joined by some of his guests, Katherine Sneddon-Simons, Ted and Joan Cleather, and LaLa Lee at a Government House.

Symphony Nova Scotia’s Legacy Circle was officially launched on September 7, 2016 at Government House. Inaugural members of the Legacy Circle were honored with a reception hosted by the Lieutenant Governor of Nova Scotia.

During his remarks, His Honour said, “Symphony Nova Scotia has long been a major contributor to the culture of this province. It has played a part in the education of our young people, and the quality of life for all Nova Scotians is enhanced by the Symphony. The Symphony is something we can all take pride in supporting. I commend you – the members of the Legacy Circle – for having the foresight to see the benefits of your actions. Your donations do make a difference. To conclude, I want to congratulate and thank the members of the Legacy Circle for their generosity. Your commitment to Symphony Nova Scotia is greatly appreciated and it will have a lasting impact.”

Legacy Circle Members were presented with a Symphony Nova Scotia Legacy Circle Pin as a token of thanks for their gift by the Lieutenant Governor.

Membership in the Legacy Circle is open to everyone who has made a gift to Symphony Nova Scotia in their will or estate plans. For more information about Legacy Giving, call Jordan Fisher at 902.421.4403 or email [email protected].