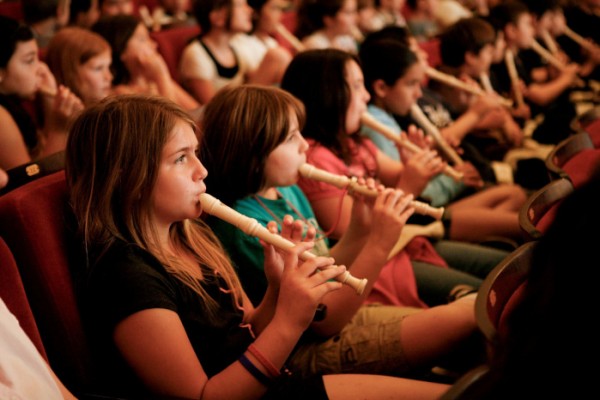 More than 1000 local students from 18 schools will join Symphony Nova Scotia at Halifax’s Rebecca Cohn Auditorium on Thursday, May 7 for interactive participatory concerts as part of the acclaimed “Link Up” program.

“Link Up” is a highly participatory, internationally acclaimed program that pairs orchestras across the country with schools in their local communities. Created by Carnegie Hall’s Weill Music Institute in 1985, the program invites students to learn about orchestras and symphonic music through a year-long, hands-on music curriculum. Each year focuses on specific concepts, including rhythm, melody, tempo, orchestration, and composition.

The culmination of the annual program is a live joint performance, giving students the opportunity to sing and play recorder or violin along with their partner orchestra. This performance often serves as students’ first concert experience, and provides them with a unique opportunity to apply the musical concepts they’ve studied.

Symphony Nova Scotia’s “Link Up” concerts are happening Thursday, May 7, with two performances at 10:30 and 12:30 pm. Between the two performances, more than 1000 students from 18 Nova Scotia schools will come together to play with the orchestra.

Conducted by Nova Scotia music education specialist Gary Ewer, the concerts are titled “The Orchestra Sings”, and feature a blend of traditional and classical music, arranged especially for the orchestra and students. Highlights include excerpts from Beethoven’s Ninth Symphony, Dvořák’s New World Symphony, and Stravinsky’s Firebird Suite, as well as traditional songs in French and Gaelic.

The concerts are not open to the public, but admission may be granted by request at [email protected] Members of the media, school boards, and all levels of government are encouraged to attend.

Symphony Nova Scotia is one of more than 70 national and international organizations chosen for this program. Link Up’s national partnerships grew out of the program’s ongoing work with New York City schools, through which Carnegie Hall has engaged hundreds of thousands of students in musical learning since its inception in 1985.

Visit carnegiehall.org/LinkUp for a complete list of participants and further details.

For more information about Link Up and Symphony Nova Scotia’s many other Education and Outreach programs, visit www.symphonynovascotia.ca/education.

The Link Up program in action:

About Gary Ewer
Gary Ewer is a composer, arranger, conductor and clinician. A native of Halifax, Nova Scotia, he has an extensive background in instrumental and choral conducting. He is the current director of Dalhousie University’s Collegium Cantorum choir, as well as former director of the Dalhousie Chorale and Chamber Choir. He has also most recently been a Senior Instructor of Music at Dalhousie, teaching aural skills, music theory, orchestration, and choral techniques.
As a public school music teacher for many years, Gary conducted concert bands, choirs, and the Halifax Schools Symphony Orchestra. His choral and instrumental compositions and arrangements have been performed by the Elmer Isler Singers, Symphony Nova Scotia, the Halifax Camerata Singers, and many other ensembles. His works are published by Kelman Hall Publishing and Pantomime Music Publications. He is currently the conductor of Symphony Nova Scotia’s Education and Outreach school program.