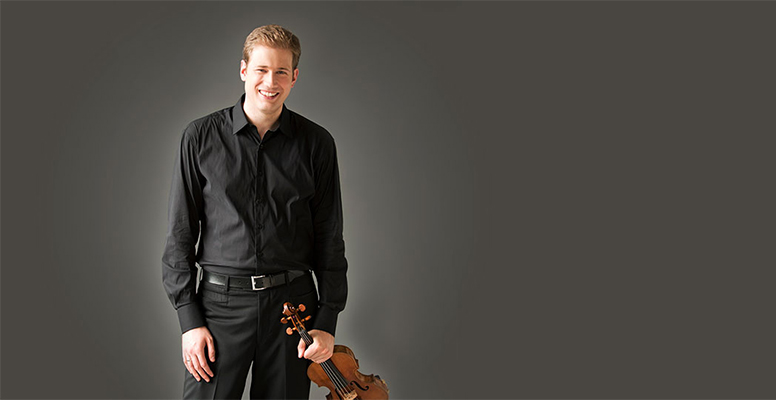 “Colours, energy, comfort, and discoveries make up this program,” says conductor Alain Trudel. “It’ll be a little like watching a movie… but with ears!”

Crow currently serves as Concertmaster of the Toronto Symphony, and after multiple appearances in Nova Scotia, both with Symphony Nova Scotia and the Scotia Festival, he’s become a Halifax audience favourite.

Crow is also very familiar with Korngold’s Violin Concerto, after stepping in at the last minute to perform it in an acclaimed concert with the Toronto Symphony in 2015.

“There is not a long list of musicians who can step in on short notice and play the Korngold piece,” wrote Martin Knelman, in the Toronto Star. “But one of them happens to be Jonathan Crow, the TSO’s concertmaster.”

This will be Symphony Nova Scotia’s first-ever performance of the Korngold Concerto, a lush, romantic work that’s been a popular hit since its debut in 1947.

“For me, getting to pay the Korngold concerto is like going back in time to the golden age of film, and having a chance to play some of the greatest movie scores of all time – all rolled into one amazing orchestral showcase!” says Crow.

“Korngold himself said that the concerto was written ‘more for a Caruso than a Paganini,’ and you can certainly hear that in the long, sweeping violin melodies. He sells himself a little short, though – the last movement has enough virtuosity to satisfy anyone who wants to hear some great violin pyrotechnics!”

Korngold was a European child prodigy who later became an Oscar-winning film composer, and his Violin Concerto includes themes from several of his film soundtracks, including 1936’s Anthony Adverse, 1937’s Another Dawn and The Prince and the Pauper, and 1939’s Juarez. During his career, Korngold also composed the scores for The Adventures of Robin Hood (1938), The Sea Hawk (1940), Captain Blood (1935), and many more.

“This concerto is one of my all-time favourites, and we’re performing it with one of my absolute favourite violinists,” says Trudel.

“To me, this concerto can be described as blockbuster movie soundtrack meets Mahler meet Heifetz meets the great tradition of the romantic violin concertos… What more do you want, really!”

The Adagio is “arguably the most often-heard work of classical music written in the last century,” says the New York Times. “If any music can come close to conveying the effect of a sigh, or courage in the face of tragedy, or hope, or abiding love, it is this.”

The concert’s grand finale will be Aaron Copland’s radiant Appalachian Spring, an instant and popular success that led to Copland winning the Pulitzer Prize in 1945.

“Appalachian Spring brings us back to the place, language, and values of gratitude and simplicity – even though the orchestra parts are themselves challenging,” explains Trudel.

“In our crazy, fast-paced world, it’s good to take this moment to be grateful for the life that we all share together.”

Conductor Alain Trudel has performed with all of Canada’s orchestras, and is widely praised for his “immense talent as conductor, musician and performer” (La Presse). His last appearance in Halifax, with the Scotia Festival in 2009, was a critically acclaimed audience success.

During his time in Halifax, Trudel will also lead Symphony Nova Scotia’s “Baroque Fireworks for Brass” concert on November 26 and 27 at St. Andrew’s United Church, Halifax.

This concert was originally scheduled to be performed by Symphony Nova Scotia in March 2015, but was cancelled due to a snowstorm. Tickets for this encore performance are very limited, so order today!

A frequent guest of the major orchestras in Canada, Trudel also appeared at the helm of orchestras in the U.K., U.S., Sweden, Italy, Russia, Japan, Hong-Kong, Kuala Lumpur, and Latin America. Highly appreciated for his collaborative spirit, he has worked with many world-famous artists including Ben Heppner, Anton Kuerti, Measha Brueggergosman, Herbie Hancock, Branford Marsalis, Alain Lefèvre, and Pinchas Zukerman.

Trudel made his Opera de Montréal debut in 2009, conducting Mozart’s Die Zauberflöte, as well as the 30th anniversary gala, which was released as a live CD and nominated at L’ADISQ. In 2010, he also made his debut at l’Opéra de Quebec conducting their Gala as well as leading the 2011 production of Die Fledermaus. Since 2012, he has been Music Director of the Operas at the University of Western Ontario.

Trudel has always been highly committed to the new generation of musicians. For eight seasons (2004-2012) he was Conductor of the Toronto Symphony Youth Orchestra, and has been regularly invited to conduct the National Youth Orchestra of Canada since 2006. Their recording of Mahler’s Sixth Symphony and Le sacre du printemps was nominated as Best Orchestral Album of the Year at the 2010 Juno Awards. He is Guest Professor of Orchestra and Opera at the University of Ottawa.

First known to the public as a trombone soloist, “The Jascha Heifetz of the trombone,” Trudel made his solo debut at the age of 18, with Charles Dutoit and l’Orchestre symphonique de Montreal. He has been guest soloist with leading orchestras on five continents including l’Orchestre philharmonique de Radio-France, the Hong-Kong Philharmonic, The Austrian Radio Orchestra, Carnegie-Weill Recital Hall (New York), Dresdner Neueu Musik Tage (Germany), Tasmania New Music Festival (Australia), Conservatoire national supérieur de Paris (France), Festival Musica Strasbourg (France), Klangbogen Festival (Vienna), and the Akiyoshidai and Hamamatsu festivals (Japan). He was happy to go back to his roots as Hannaford Street Silver Band’s Principal Guest Conductor during the 2010/11 season.

As a composer, Trudel has been commissioned by the CBC, the National Arts Centre, the Toronto Symphony Orchestra, and Bellows and Brass, among others. His works have been performed by orchestras in Atlanta, Québec, Toronto, Ottawa, Montréal, Kuala Lumpur, and Buffalo.

Trudel is the recipient of numerous awards, among them the Virginia Parker, Le grand prix du disque Président de la République de l’Académie Charles Cros (France), and the Heinz Unger Prize for Conducting. He has also been named an Ambassador of Canadian Music by the Canadian Music Center. He was the first Canadian to be a Yamaha International Artist. 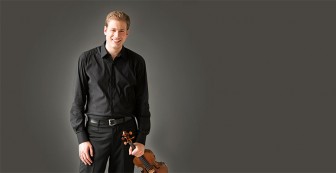 The 2016/17 season marks Canadian violinist Jonathan Crow’s sixth season as Concertmaster of the Toronto Symphony Orchestra. A native of Prince George, British Columbia, Crow earned his Bachelor of Music in Honours Performance from McGill University in 1998, at which time he joined the Montreal Symphony Orchestra as Associate Principal Second Violin.

Between 2002 and 2006 Crow was the Concertmaster of the Montreal Symphony Orchestra; during this time he was the youngest concertmaster of any major North American orchestra. He continues to perform as Guest Concertmaster with orchestras around the world, including the National Arts Centre Orchestra, Mahler Chamber Orchestra, Filarmonia de Lanaudiere, and Pernambuco Festival Orchestra (Brazil).

Crow has performed as a soloist with most major Canadian orchestras including the Montreal, Toronto, and Vancouver Symphony Orchestras, the National Arts Centre and Calgary Philharmonic Orchestras, the Victoria and Kingston Symphonies, and Orchestra London, under the baton of such conductors as Charles Dutoit, Sir Yehudi Menuhin, Sir Andrew Davis, Peter Oundjian, Kent Nagano, Mario Bernardi, and João Carlos Martins.

Crow has recorded for ATMA, Bridge, CBC, Oxingale, Skylark, and XXI-21 labels, and is heard frequently on Chaîne Culturelle of Radio-Canada, CBC Radio Two, and National Public Radio, along with Radio France, Deutsche Welle, Hessischer Rundfunk, and the RAI in Europe.

Crow plays the ex-Wm. Kroll Guarneri del Gesù 1738 violin, made available to the TSO for the use of the Concertmaster thanks to the generosity of Dr. & Mrs. Edward Pong.