One of the concert’s many highlights will be the rarely heard “antiphonal” brass of Giovanni Gabrieli, which positions the brass players throughout the auditorium to create an immersive, three-dimensional experience for the audience.

Conductor Alain Trudel has performed with all of Canada’s orchestras, and is widely praised for his “immense talent as conductor, musician and performer” (La Presse). Trudel is well-known as a trombonist as well as a conductor, and his last appearance in Halifax, with the Scotia Festival in 2009, was a critically acclaimed audience success.

Tickets for both Baroque Fireworks for Brass concerts begin at $51 (HST included) or $16 for under-30s, and you can save up to 35% by purchasing a ticket package. Tickets are available at the Dalhousie Arts Centre Box Office (6101 University Avenue, Halifax), by phone at 902.494.3820, or online at symphonynovascotia.ca. 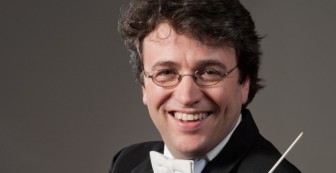 A frequent guest of the major orchestras in Canada, Trudel also appeared at the helm of orchestras in the U.K., U.S., Sweden, Italy, Russia, Japan, Hong-Kong, Kuala Lumpur, and Latin America. Highly appreciated for his collaborative spirit, he has worked with many world-famous artists including Ben Heppner, Anton Kuerti, Measha Brueggergosman, Herbie Hancock, Branford Marsalis, Alain Lefèvre, and Pinchas Zukerman.

Trudel made his Opera de Montréal debut in 2009, conducting Mozart’s Die Zauberflöte, as well as the 30th anniversary gala, which was released as a live CD and nominated at L’ADISQ. In 2010, he also made his debut at l’Opéra de Quebec conducting their Gala as well as leading the 2011 production of Die Fledermaus. Since 2012, he has been Music Director of the Operas at the University of Western Ontario.

Trudel has always been highly committed to the new generation of musicians. For eight seasons (2004-2012) he was Conductor of the Toronto Symphony Youth Orchestra, and has been regularly invited to conduct the National Youth Orchestra of Canada since 2006. Their recording of Mahler’s Sixth Symphony and Le sacre du printemps was nominated as Best Orchestral Album of the Year at the 2010 Juno Awards. He is Guest Professor of Orchestra and Opera at the University of Ottawa.

First known to the public as a trombone soloist, “The Jascha Heifetz of the trombone,” Trudel made his solo debut at the age of 18, with Charles Dutoit and l’Orchestre symphonique de Montreal. He has been guest soloist with leading orchestras on five continents including l’Orchestre philharmonique de Radio-France, the Hong-Kong Philharmonic, The Austrian Radio Orchestra, Carnegie-Weill Recital Hall (New York), Dresdner Neueu Musik Tage (Germany), Tasmania New Music Festival (Australia), Conservatoire national supérieur de Paris (France), Festival Musica Strasbourg (France), Klangbogen Festival (Vienna), and the Akiyoshidai and Hamamatsu festivals (Japan). He was happy to go back to his roots as Hannaford Street Silver Band’s Principal Guest Conductor during the 2010/11 season.

As a composer, Trudel has been commissioned by the CBC, the National Arts Centre, the Toronto Symphony Orchestra, and Bellows and Brass, among others. His works have been performed by orchestras in Atlanta, Québec, Toronto, Ottawa, Montréal, Kuala Lumpur, and Buffalo.

Trudel is the recipient of numerous awards, among them the Virginia Parker, Le grand prix du disque Président de la République de l’Académie Charles Cros (France), and the Heinz Unger Prize for Conducting. He has also been named an Ambassador of Canadian Music by the Canadian Music Center. He was the first Canadian to be a Yamaha International Artist.