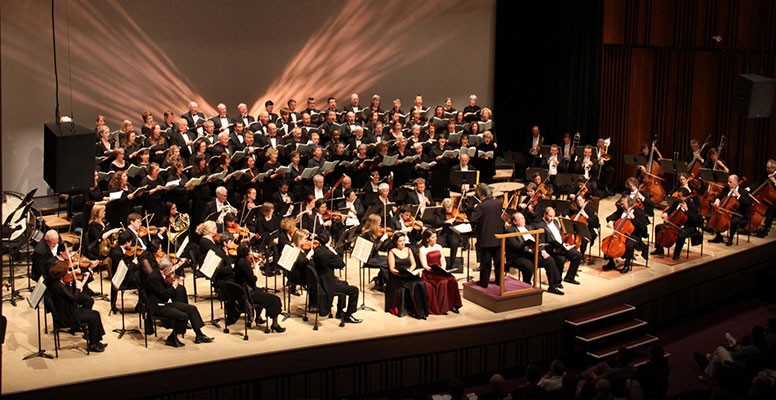 Halifax, NS – Symphony Nova Scotia and the Halifax Camerata Singers remember the fallen on November 11 and 12 at Halifax’s Rebecca Cohn Auditorium with two performances of one of the world’s most moving and meaningful classical works: Mozart’s immensely powerful Requiem.

“A requiem is a mass for the dead, and on this day we particularly think about, and honour, the victims of all the wars and the violence in this world,” says Symphony Nova Scotia’s Music Director Bernhard Gueller.

The Requiem was Mozart’s final written work, and Mozart himself passed away before he could finish it in 1791. According to his wife Constanze, he felt he was writing the Requiem for his own funeral.

“Most scholars agree that the Requiem was completed by Mozart’s student Süssmayr after his death,” says Gueller.

“Nevertheless it is intensely Mozart, and it is the most sublime work in this genre. Those who don’t know it will be stunned by the grandeur of the music; those who do will feel afresh the profundity of the music.”

The Requiem is one of the most beloved and recognizable pieces of music in the world. It has been quoted, sampled, and repurposed in countless popular songs and film soundtracks, and the mysteries surrounding its creation continue to inspire conjecture and controversy.

The Oscar-winning 1984 film Amadeus explored the story of the Requiem’s creation, suggesting that Mozart’s rival Antonio Salieri played a role in the work’s commissioning and Mozart’s death. That myth has been proven untrue, but many controversies about the Requiem remain.

Despite the uncertainty surrounding the Requiem, it remains an astonishingly beautiful work, full of fire, terror, tenderness, and lament. Beethoven said, “If Mozart did not write the music, then the man who wrote it was a Mozart.”

Behind the Scenes with Maestro Gueller: Mozart’s Requiem

About Jean-Philippe Tremblay, conductor
Canadian conductor Jean-Philippe Tremblay has an impressive track record and has been heralded by the Canadian press as a “great interpreter” with a “true musical vision.” He is founder and Music Director of Orchestre de la Francophonie, which has given more than 250 concerts across Canada, China, and the United States under his leadership.

In North America, Jean-Philippe is regularly invited as guest conductor to the National Symphony Orchestra in Washington D.C., the symphonies of Montreal, Toronto, Vancouver, and Edmonton, the Orchestra of the Manhattan School of Music, the Philharmonic Orchestra of the Americas, and, at the invitation of Gustavo Dudamel, the Simón Bolivar Youth Orchestra.

In recent seasons he has led prestigious European ensembles including the Orchestre National de France, the Rotterdam Philharmonic Orchestra (at the invitation of Yannick Nézet-Séguin), the Vienna Chamber Orchestra, the Spanish National Orchestra, and the Prague, Dresden, and Budapest radio symphony orchestras. In 2012, Jean-Philippe made a very successful conducting debut in Utrecht with the Netherlands Radio Philharmonic Orchestra with national broadcast and critical acclaim.

Jean-Philippe studied viola, composition, and conducting at the Pierre Monteux School for Conductors and Musicians, the Royal Academy of Music in London, and at Tanglewood with Seiji Ozawa, André Previn, Michael Jinbo, Jorma Panula, and Robert Spano.

He is the recipient of many prestigious awards, including the Musician’s Prize at the Dimitri Mitropoulos International Competition for Conductors. His recordings have won many awards, as well as critical acclaim from prestigious publications such as Gramophone and Diapason.

The core choir of the Symphony Nova Scotia Chorus is the nationally acclaimed Halifax Camerata Singers. Founded in 1986 by Jeff Joudrey, Artistic Director, the Halifax Camerata Singers performs choral repertoire from all periods and styles and is Atlantic Canada’s leading chamber choir. To learn more, visit their website at www.halifaxcamerata.org.