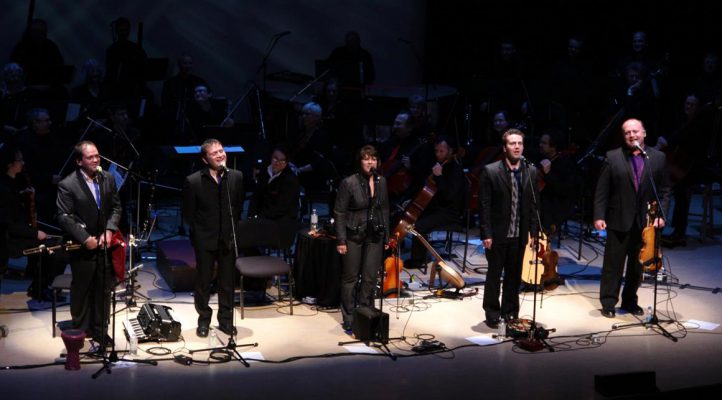 From their roots in Cape Breton’s Sydney Mines, the five MacNeil siblings are famed worldwide for their tight harmonies, fleet-footed step-dancing, and deft multi-instrumental prowess. Their 30-year career has resulted in 17 recordings, as well as numerous tours across Canada, the U.S., the U.K., and Europe.

Conducted by Symphony Nova Scotia’s Associate Conductor (and Cape Bretoner) Martin MacDonald, both concerts will feature highlights from the Barras’ 30-year career. Tunes will run the gamut from new songs to traditional reels and jigs – all featuring the Barras’ signature step-dancing, vocal harmonies, and performance chops on well over a dozen stringed, wind, and percussion instruments.

“The Barra MacNeils are thrilled to be back in Halifax as guests of Symphony Nova Scotia,” says Stewart MacNeil.

“We will be featuring much of the music from our award-winning The Barra MacNeils with Symphony Nova Scotia: Live in Concert recording as well as some new arrangements. We’ve been performing our symphony shows with most of Canada’s finest orchestras, and these very popular shows have become favourites for fans of the band, and also have earned us many new fans as well.”

After both concerts, the Barras will be available for a meet and greet in the lobby, just outside the concert hall.

Tickets for both concerts begin at $30 (HST included), and you can save up to 35% by purchasing a ticket package. Tickets are available at the Dalhousie Arts Centre box office (6101 University Avenue, Halifax), at 902.494.3820, or online at symphonynovascotia.ca.

About the Barra MacNeils

2016 marks 30 years for the Barra MacNeils in an outstanding recording and touring career.

Their recent releases have covered the span of their entire career, as well as live concerts reflecting their musical course, from humble family beginnings to worldwide acclaim. The concert touring in support of these projects has taken the group to theatre and festival stages coast to coast across Canada, and has had them jetting across America from festival stage to theatre stages and beyond, as well as sending them to Ireland and Scotland for prestigious events across the Atlantic.

As a group, the MacNeil siblings are widely regarded as one of the greatest live concert acts in the Celtic world. Hailing from Sydney Mines, Cape Breton, the family group is deeply rooted in Celtic music, culture, dance, language, and history. Their numerous critically-acclaimed recordings have included their own original songs as well as tried and true standards, both instrumental and vocal.

The Barra MacNeils’ live concert experience brings so much to the stage. Multiple lead vocalists, beautiful sibling harmonies, and top-drawer instrumental prowess on a wide variety of acoustic, stringed, percussion, and wind instruments, blended with dancing, storytelling, Gaelic songs, and a journey through an ancient culture; it is family entertainment at its best.

Steeped in Cape Breton tradition with strong Celtic roots and musical artistry, this diverse and talented family group continues to wow audiences around the world with their captivating vocals and harmonies, and extraordinary musicianship.

As Canada’s Celtic ambassadors, the Barra MacNeils continue to perform to sold-out audiences throughout Canada, the U.S., the Caribbean, the U.K., and Europe. They headline major festivals, perform concerts including their annual Christmas tour, make special guest appearances, and appear on television and in film.

The Barra MacNeils will continue to do what they love best – play their music for the fans. In tours across Canada, the U.S., and Europe, they spread their distinctive brand of Celtic flavour around the world.