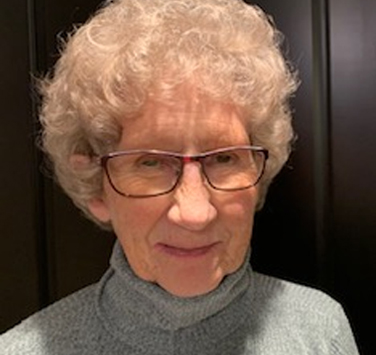 Shirley Margaret Dean serves as the Women for Music representative to the Board of Symphony Nova Scotia. Born in rural Hants County, Shirley attended Windsor Academy and Dalhousie University, later working internationally in New Zealand and Australia. She worked in medical research in the Dal Medical School and was a Partner in a Scientific Supply business. During her career in ultramicroscopy, Shirley served on local, national, and international committees. She was a longtime member of the Board of the Canadian Youth Hostels Association in Nova Scotia and was a member of the Board of the Nova Scotia Youth Orchestra. Shirley is a member of the Halifax Ladies Musical Club, a founding member of the Seniors College, and a longtime subscriber of Symphony Nova Scotia and Inner Space Concerts.

One of her joys in life is travel, especially travel with music. Some of her highlights include opera in Sydney, Rome, Prague, and New York; ballet in Moscow; chamber music in Dresden, London, and St. Petersburg; and organ music in Amsterdam and Paris.

Shirley represents a group of women, Women for Music, who work to support the orchestra, many of whom are subscribers. She looks forward to learning more about how the orchestra functions and being a useful member of the Board.

Entering the first year of a one-year term (until 2023) on the Board.